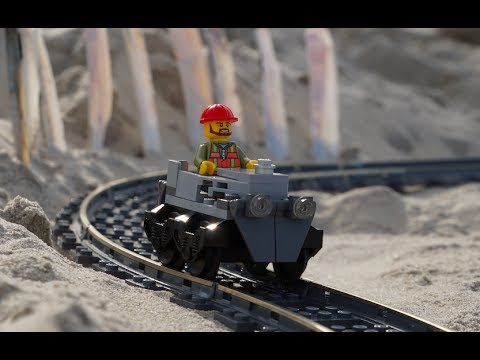 Whether you consider your sandcastle construction skills to be sub-par or are a master with the bucket and shovel, you've got to hand it to a crew who engineered quite an impressive miniature sand rollercoaster with LEGOS, then strapped a camera to the car to capture just what it'd be like to ride.

The LEGO coaster was built by the group of friends behind the popular YouTube channel 5MadMovieMakers, who've previously built a number of elaborate coaster-like contraptions for Hot Wheels, KNEX, and even marbles. This one -- which was set up on a beach on the Outer Banks in North Carolina -- was decked out with a number of sandcastle-specific features, including a castle, underground tunnels, and even a "seashell forest" before presumably being whipped to smithereens by the cruel hands of time (and, ya' know, wind and water).

The track and train are part of an official LEGO set, and the car runs on a combination of gravity and a special LEGO battery-powered motor, which keeps it whipping around corners and up slight inclines. And while its small size makes it suitable for LEGO minifigs and brave pet hamsters, you can get an idea of what it might be like to hitch a ride thanks to some POV footage they captured by strapping on a GoPro and letting 'er rip -- that starts around the 1:08 mark.