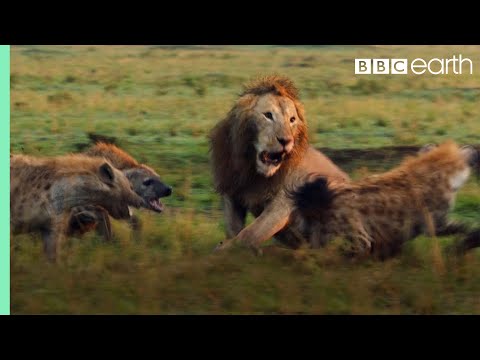 Much like ogres, lions have layers. The jungle cats are ferocious, powerful, regal creatures. But beyond all the requisite growling and the ruthless carnivorous hunting, they're tender as hell (we're citing the Lion King as our source). In fact, just last week, BBC Earth captured some strikingly clear footage of a golden lion rescued, lovingly, from a snide pack of bullying hyenas by his lion comrade. It's a little bit like the plot of I Love You, Man, if Jason Segel and Paul Rudd were enormous fanged felines.

As part of the BBC series Dynasties, the video, narrated by Sir David Attenborough, follows male lion, Red, as he stumbles through the brush. As he walks, he encounters a gaggle of 20 hyenas, who do not cackle at quite the same register as they do in the Lion King, but appear to be utterly unpleasant opponents, all the same. Surely Red (who is a very handsome lion, we might add) can take on a hyena or two. He's in good shape, his fur is glowing, he's probably a Leo. But 20 is no small number, and as he attempts to defend himself, the enormous pack surrounds him. Things don't look good.

Finally, in a dramatic twist almost too sentimental, Red's cousin, Tatu, arrives on the scene, having heard the cries of distress. Just when it appears that Red's energy is dwindling, kinship prevails. Together the pair manages to fend off the pack, sending the giggly oversized rats back from whence they came. As the video comes to a close, the two jungle cats saunter off into the sunset, nuzzling one another delicately before collapsing into an affectionate pile. Just two bros, exuding masculinity, unabashedly telling one another how they feel.

Eliza Dumais is a news writer at Thrillist. Follow her on Twitter for proof.
Thrillist TV
History of
The History of the McRib