This Giant Shipworm is 5 Full Feet of Nightmare Fuel 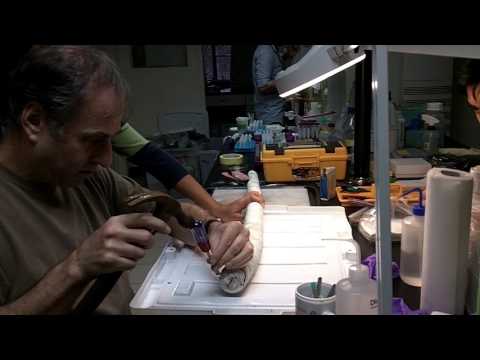 The deep ocean is full of ghastly creatures, but so are the mucky depths of a certain bay in the Philippines. It’s from those latter waters that researchers have been able to examine the long, slimy -- and apparently pretty pungent -- giant shipworm. Actually a super-elongated mollusk, the giant shipworm is good company for the many hell-spawned, demon fish that roam darkened waters across the globe. It can grow up to five-feet long, and yes, give you nightmares.

The giant shipworm feeds off mud in a vertical position, spending its life encased in a thick shell it excretes on its own. Unlike the much more common shipworm, a maritime pest that burrows in boats feeding off rotten wood, the giant shipworm siphons up hydrogen sulfide from mud, decaying vegetation, and other marine sediments. It then uses a special bacteria in its gills to process that matter for digestion. Hydrogen sulfide emits that unforgiving “rotten eggs” smell commonly associated with farts. Suffice it to say giant shipworms aren’t easy on the nostrils, in addition to nightmarish in appearance.

A living specimen had never been examined until a team of researchers, led by University of Utah professor Margo Haywood, were able to get their hands on one, publishing their findings with the National Academy of Sciences.

The serpentine creature is a sight for sore eyes, but it’s still a biological marvel, as explained by Haywood in the video above. “Inside that white shell is a very long, slippery creature that looks like a giant worm, but is actually a relative of a clam.”