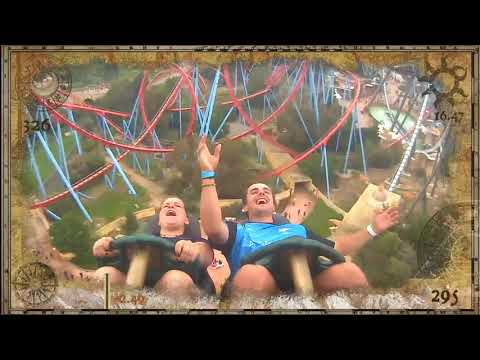 Life is like a roller coaster. It has ups and downs, it makes us nauseous, everybody’s screaming, and we’re all clinging to life by the promise of a manmade structure remaining intact. But also because there are occasional mishaps on coasters, and with them, opportunities for people to help each other out. And a New Zealand man knows all about that, as he’s just gone viral for catching someone’s cell phone midair on a roller coaster.

Samuel Kempf was riding a coaster at Spain's PortAventura amusement park, when the incident occurred. He’d been in Europe representing New Zealand in the world championship for fistballing, which is sort of like volleyball but you’re allowed to bounce the ball and it sounds a lot more intense because of the word fist.

After Kemf uploaded his impressive catch to YouTube on Wednesday, he explained the experience in an interview with Stuff New Zealand. He’d first noticed that, before the ride’s drop, a man two rows ahead of him had dropped his phone out of reach in the car.

"He was trying to reach down and grab it but because he was locked in he couldn't reach it,” he told Stuff. “And I just jokingly said to my brother and the people we were with 'get ready to catch.’"

Then the joke was over.

"The ride started and I totally forgot about it because I was just in the moment 'cause it was such a good ride and then after the first drop we rose up and I just saw the phone drift across my view so I reached out and managed to catch it.”

After this epic display of hand-eye-coordination, the man who owned the phone thanked Kempf in the kindest way a human at an amusement park possible could -- he purchased the corny, bordered footage they offer at the end of the ride.

Ruby Anderson is a News Writer for Thrillist.
Thrillist TV
History of
The History of the McRib