Some people will go to extremes to nab the absolute cheapest flight they can find, whether it means schlepping all the way to an airport in another city, booking with a near-bankrupt airline... 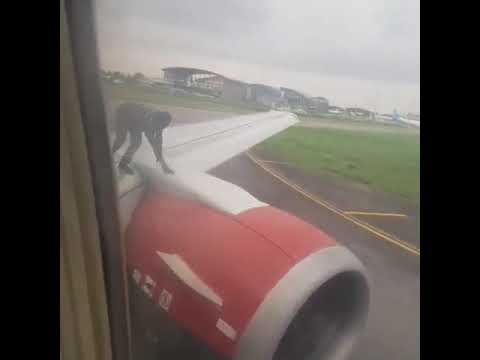 Whether its schlepping to an airport in another city or booking with a near-bankrupt airline, some frugal travelers go to extremes to nab the absolute cheapest flights available. But frugality is a lot different than desperation, which is what led one man to try to hitch a free flight by hopping onto a plane's wing just before takeoff.

While taxiing before takeoff from Lagos, Nigeria last week, an Azman Air flight headed to Port Harcourt was halted after an unexpected would-be passenger was discovered clinging to the plane's left wing. Fortunately, the pilots were quick to notice the man and eventually halted the aircraft and shut off the engines, according to a CNN report. The unidentified man, who was obviously unaware of how dangerous it is to be in such close proximity to an engaged jet engine, also reportedly stashed a piece of luggage inside one of them.

While the pilots act quickly, the man's presence on the wing startled passengers on board. In a video captured from inside the cabin (shown above), you can hear people screaming and shouting in shock. The unidentified man's motives for trying to cling to the jet's exterior remain unclear, but he likely wouldn't have done so unless he was in a truly desperate situation. Either way, in a way he's lucky his attempt was foiled, considering it would have almost certainly ended in serious injury or death.

Once the pilots alerted airport officials, the man was taken into custody. The flight was also delayed for a short time as passengers and crew were forced to disembark for additional security checks, but eventually made its way to Port Harcourt as scheduled.