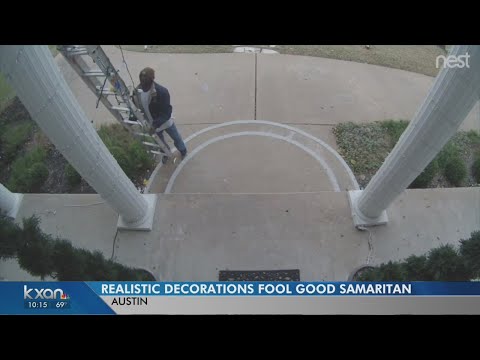 Christmas Vacation came out in 1989, and ever since, Christmas has been a better, more emotionally volatile time for all. It's a surefire way to kill some holiday downtime, but the iconic scene in which Clark Griswald falls off the roof while stapling Christmas lights has led to some less-than-advisable Christmas decorations. Like the ones shown in the video above.

ABC 13 reports that a family in Austin staged the scene on their own roof, complete with a Clark Griswold mask on a dummy purchased online and clothes from Goodwill that closely resembled the ones from the movie -- all in the name of winning a neighborhood contest. We respect that.

But the problem with convincingly representing someone's life being in danger is... it looks like someone's life is in danger. As you can see, a passerby was caught on surveillance footage rushing over with a ladder and attempting to rescue the dummy. "Oh mister, please hold on!” he exclaims. He even called 911.

"He was doing everything he could to get the ladder! And be like 'Save Clark!'" the sister-in-law of the homeowner told KVUE-TV. "He didn't give up. Whatever he had to do, he was going to save old Clark Griswold."

Since then, the family has posted a sign on the bottom of the ladder explaining the situation: "Clark G is part of our Christmas display please do not call 911."

"We'd love to be able to find him and reach out. We have a very special gift that we would like to give him and we'd like to tell him thank you," she added.

This honestly heroic man is a retired veteran named Alfred, and in our opinion, he should get a parade.


James Chrisman is a News Writer at Thrillist. Send news tips to news@thrillist.com and follow him on Twitter @james_chrisman2.
Our Newsletter