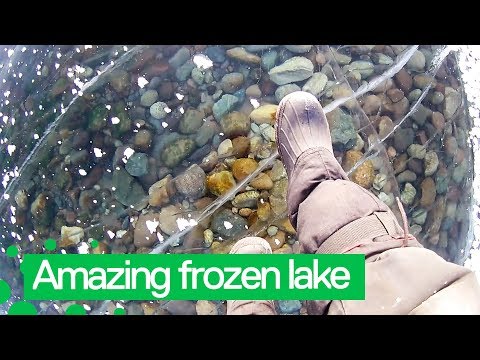 Ask any ice fisher and they'll tell you there's something uniquely serene about standing in the middle of a frozen lake. Then again, as peaceful and beautiful as it may feel, when the lake you're standing on is not only the deepest in the world, but also crystal clear on the surface, it's tough not to imagine you're tempting fate. Or at least that's how we feel after watching this video of a dude who bravely tiptoed out onto frozen Lake Baikal recently.

In the clip (posted above), a Russian dude captures his slow and steady walk out onto the frozen surface of Lake Baikal in Siberia, which is not only the deepest lake in the world, but also the world's largest reservoir of fresh water. With a selfie stick in hand, the man captured his delicate walk atop the glasslike surface and you can clearly see the ground and rocks grow smaller and smaller beneath his feet. Making it all the more insane, there are visible fissures and cracks everywhere, which look as though any section could give way at any moment. Beautiful? Sure. Terrifying? Absolutely.

Fortunately, according to the man, the ice was at least six inches thick, though his slow and deliberate movements make it pretty certain he was proceeding with extreme caution. Either way, the experience was apparently pretty mesmerizing.

''I could clearly see the bottom of the lake, stones, and fish. All of this made me feel like I was looking at a fairyland," he wrote in the description of the footage, which was uploaded to Newsflare.

Let's just say we'll take his word for it.