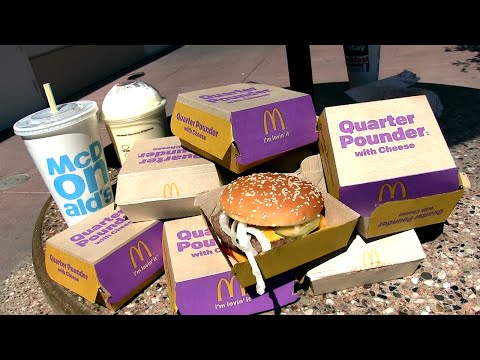 If you've ever wandered into a McDonald's at an hour later than you'd care to admit, then you probably know how easy it is to polish off a bag of value-menu cheeseburgers amid your late night hunger. But no matter how hungry or, uh, how much beer you need to soak up, you've almost certainly never eaten as much McDonald's in one sitting as Matt Stonie.

Watch as the famed competitive eater, who you may know from that time he scarfed down 25 Big Macs in 22 minutes (among many other eating challenges), slams 10 McDonald's Quarter Pounders with cheese along with a large vanilla shake and a large Diet Coke in just six minutes and 49 seconds. He eats more than one of the decently sized burgers in about a handful of bites, and ultimately makes the giant mound of fast food look like a mere afternoon snack.

At 540 calories each, 10 Quarter Pounders with cheese adds up to a whopping 5,400 calories plus at least another 510 in the shake (the McDonald's nutrition calculator doesn't account for sizes) for a total of close to 6,000 calories. If that's not insane enough, just think of it this way: he just ate more McDonald's than you probably eat in an entire year. Damn.

Tony Merevick is Cities News Editor at Thrillist and doesn't think he's eaten that much McDonald's in a whole year, let alone one sitting. Send news tips to news@thrillist.com and follow him on Twitter @tonymerevick.
Thrillist TV
History of
Our Newsletter