Someday, you might see Mikaila Ulmer smiling at you from between $6 bottles of organic fruit juices and artisanal waters at Whole Foods. That's because the 11-year-old entrepreneur just made an $11 million deal with the chain of high-end grocery markets to carry bottles of her homemade BeeSweet Lemonade, all of which bear her face on the packaging.

Soon, 55 Whole Foods stores in Arkansas, Louisiana, Oklahoma, and Texas will sell Ulmer's sweet drinks, according to a report by Business Insider. The new deal is the latest success for the brilliant Texas girl, who said she was inspired to create BeeSweet lemonade after being stung by a bee when she was 4 and inheriting her great grandma's "special recipe" for flaxseed lemonade. Previously, she scored $60,000 in seed money after appearing on ABC's "Shark Tank." She's even served her lemonade to President Barack Obama, per the report.

As her product's name suggests, the lemonade is sweetened with honey, which BeeSweet sources from local honeybees. Not only is Ulmer a beverage business prodigy, but also a self-proclaimed "bee ambassador," donating a chunk of BeeSweet's profits to local and international organizations that fight to save honeybees, according to the company's website. Here's Ulmer explaining her efforts to save the bees: 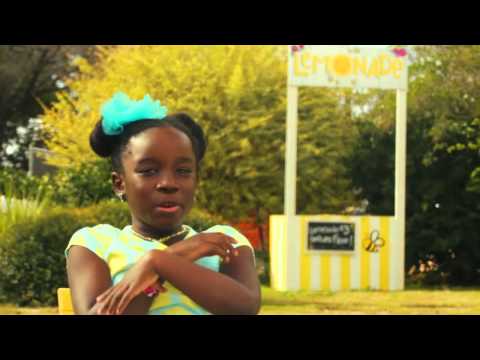 Basically, Ulmer's your new role model. When she's not participating in entrepreneurship panels and signing lucrative deals with grocery chains, she still operates her modest lemonade stand. Meanwhile, the closest you've ever been to a successful lemonade stand was on coolmath-games.com in your grade school computer lab.

Tony Merevick is Cities News Editor at Thrillist and literally sold rocks for a few cents when he was a kid. Send news tips to news@thrillist.com and follow him on Twitter @tonymerevick.