You've maybe seen variations on the marriage of beer and booze, from beer cocktails to barrel-aged stouts. However, you probably haven't seen it done quite like this. The Minneapolis-based Modist Brewing has launched an entirely new category...

You've maybe seen variations on the marriage of beer and booze, from beer cocktails to barrel-aged stouts. However, you probably haven't seen it done quite like this. The Minneapolis-based Modist Brewing says it has launched an entirely new category of beer. It's a 40-proof ale called Boozehound, and yes, it's every bit as strong as it sounds. They're calling the release a barrel-aged old fashioned ale.

Modist is coining the term "brewed spirits" to describe what head brewer and co-founder Keigan Knee has concocted. This first crack at the category is made from bourbon mash that is brewed and fermented as a beer, aged in bourbon barrels, and then served as an old fashioned. The technology at the forward-thinking brewery, including its mash filter, makes the drink possible. It tastes a lot like an old fashioned, garnished with orange zest, but is lightly carbonated and has a beer-y feel from the yeast. 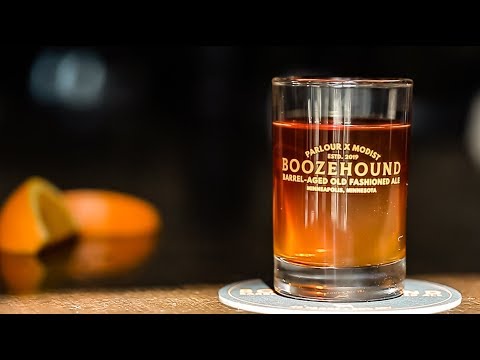 Modist is defining brewed spirits as "a style of beer that is made to replicate a traditional spirit." It continues, "The goal of a brewed spirit is to get as close as possible to creating a 'spirit,' while working within the legal limitations of beer."

The first entry is the result of a collaboration with Parlour, a restaurant that can claim to own one of the best burgers in the Twin Cities. Parlour contacted Modist, asking if the brewery had any use for a handful of 9-to-12-year-old level four char Knob Creek barrels. The brewery's response involved a bit of drooling. With Modist's mash filter, they were able to recreate a bourbon grain bill and use a brewer's yeast that could handle the high alcohol levels that would result.

It's a 40-proof beer, so it's served with a touch of caution. At the taproom, you can only get a four-ounce pour, and it costs $12. That might seem high at first blush, but there's a sort of balance of dollars to alcohol intake happening there, Modist's Dan Wellendorf tells Thrillist. Moreover, $12 for a cocktail isn't out of the ordinary. Wellendorf also notes that the brewery plans to continue making brewed spirits, but with Boozehound sitting in barrels for nearly a year, it may be a while before the next entry hits taps.

And here's the inevitable bad news: For now, the drink is only available at the brewery's taproom, Borough, and at Parlour Bar locations in both Minneapolis and St. Paul. There aren't any plans for canning or bottling at the moment, but one can hope that may change at some point.


Dustin Nelson is a Senior Staff Writer on the news team at Thrillist. Follow him @dlukenelson.