The Oscar Best Picture Moment Was a Total Disaster

Speeches began. Then someone said, "We lost, by the way."

"This is not a joke," another producer said, holding an Oscar that isn't actually his. 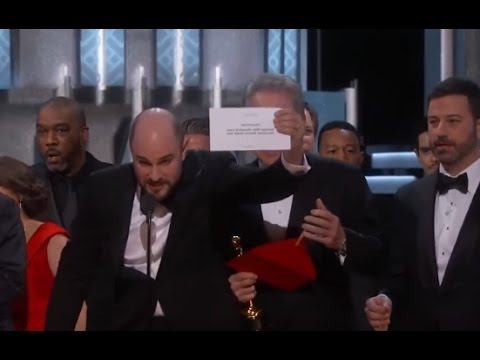 Holy shit. Moonlight won Best Picture and Steve Harvey is totally off the hook for announcing the wrong Miss Universe that one time.

It's not 100 percent clear what happened. However, based on the producers running around on stage to check envelopes and Beatty's explanation, it looks like Beatty was given the wrong envelope.

Beatty took to the microphone briefly to explain. He had an envelope for Best Actress, which was won by La La Land's Emma Stone. That's why he was confused when he opened the envelope. No one knows, at least for now, where the actual envelope was. Wherever it was, it said Moonlight.

"I want to tell you what happened," Beatty said. "I opened the envelope, and it said 'Emma Stone, La La Land.' That's why I took such a long look at Faye [Dunaway], and at you. I wasn't trying to be funny."

So that went poorly. That pretty easily ranks at the top of the most outrageous things that happened during this year's Oscars.

But it's worth noting that the real disaster was the creators of Moonlight having to accept their award in this way. The mix-up -- along with the strange crowd reaction and their success being juxtaposed with another's embarrassment -- overshadowed their achievement. It was a terrible way to discover you've won the biggest award in your field.