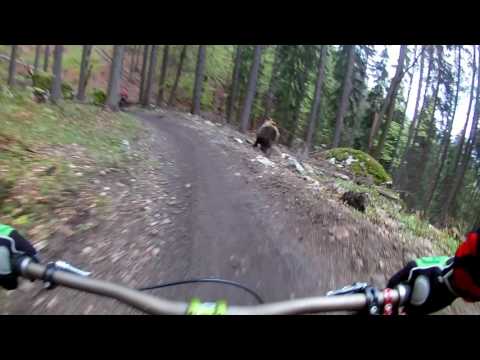 If you go biking on a path through the natural habitat of wild animals, then chances are you're going to encounter said wild animals. It looks like a couple of mountain bikers learned that the hard way, when they narrowly escaped a bear attack on a recent ride through the woods.

As you can see in slow-motion footage captured with a helmet cam (shown above), the riders are going through a slight turn when a damn-big bear appears from the trees and charges toward them at high speed; particularly, right in the direction of the seemingly oblivious leading rider. The bear comes terrifyingly close -- perhaps only a few feet -- from reaching the the person, before giving up on its brief chase and retreating back into the woods. The video lasts only a little more than 30 seconds, but goddamn, is it intense. The terrifying encounter took place in Slovakia, according to a report by Sploid.

For reasons beyond us, the video ends with the riders stopping only a short distance away and getting off their bikes, presumably, to drop numerous expletives in Slovak about what just happened. But wouldn't they want to get much, much farther away in case the bear charges at them again while on foot? Thankfully, that doesn't appear to happen before they stop filming, so let's all just assume the got the hell out of that forest safely.

Tony Merevick is Cities News Editor at Thrillist and is never going mountain bike riding again. Send news tips to news@thrillist.com and follow him on Twitter @tonymerevick.
Thrillist TV
History of
The History of the McRib