Watch Some Maniacs Shoot WD-40 Cans With a Gun, and Feel Satisfied 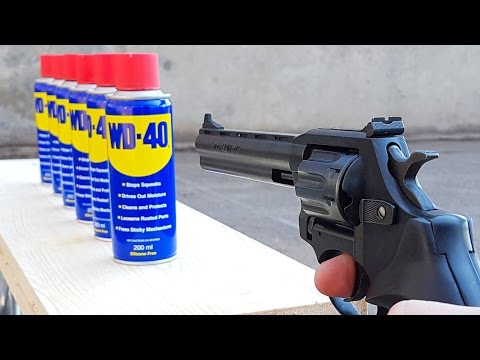 The pyromaniacs behind the MrGear YouTube channel satisfy your destructive primal urges by blowing shit up. They’ve amassed an insanely large subscriber base -- over 6 million at the present moment -- after heating knives up to glowing hot temperatures and plunging them into everyday household wares, and frying Orbeez balls until they sizzle, scream and pop. And the next logical step, it seems, is bringing firearms into the mix. What could go wrong?

In a new video that’s already registered nearly 2 million views, MrGear and his acolytes shoot a pistol at various flammable objects, such as lighters and cans of WD-40. The effect is immensely satisfying -- especially when the WD-40 is doused in ethanol -- because the spray can turns into a massive fireball. It's very dangerous. But don’t worry, because it looks like our pseudo-scientists took the necessary precautions by having a fire extinguisher and other safety items on site.

The WD-40 experiment starts at the video’s 5-minute mark, but you’ll probably want to watch the build-up. Just an advisory for all you knuckleheads out there: Don’t try any of this nonsense at home, or anywhere else for that matter.