As over-the-top as movies like Armageddon and Deep Impact may be, they do get across a very non-fictional message: you definitely don't want to be around if and when an actual big honkin' asteroid smacks into Earth.

As over-the-top as movies like Armageddon and Deep Impact may be, they do get across a very non-fictional message: you definitely don't want to be around if and when an actual big honkin' asteroid smacks into Earth. Even the tiny interlopers that crash into our planet every now and then can do some crazy and violent damage to entire cities. Fortunately, the folks at NASA are on the case, and they're preparing to launch a mission to test newtech designed to deflect life-threatening asteroids.

In what's being touted as the first-ever test of a true planetary defense system, NASA has teamed up with the European Space Agency (ESA) to try and knock an asteroid off course by slamming into it with a special probe traveling at roughly four miles per second. The Double Asteroid Redirect Test (DART) project involves targeting the asteroid known as Didymos and a much smaller rock that orbits it, deemed "Didymoon," and essentially punching the latter off its course. Neither of these monster space rocks poses a threat to Earth -- they'll both be seven million miles away from the planet at their closest point -- which is why they were chosen to serve as the test objects. If you're curious what this might actually look like, NASA released a video rendering of the plan (shown below). 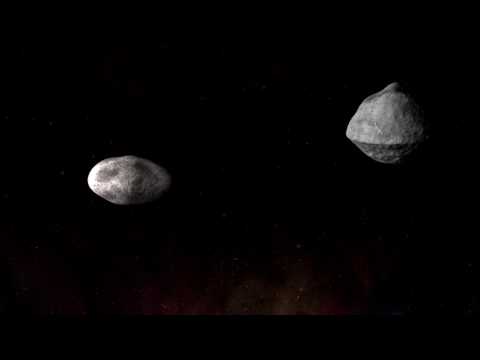 In terms of size, Didymoon is about as big as the Great Pyramid in Giza, making it the smallest asteroid to ever be visited by a probe. However, if an asteroid that big were to rocket into the Earth at a typical speed of nearly 19 miles per second, it could potentially wreck an entire region of the globe, according to the the ESA. Of course, knocking a truly mammoth Earth-threatening asteroid off course -- one that's thousands of times the size of Didymoon -- would require some serious power. But, hey, doing the test is the first step.

As for when this is all going to happen, NASA plans to launch its probe between 2020 and 2021, and expects it to smack into Didymoon in October 2022. After that, an ESA craft known as Hera will launch toward Didymos and Didymoon and investigate the crater created by DART a few years later to determine its "momentum transfer" and precisely how effective the deflection method worked. NASA unveiled its latest DART mission plans in 2018, but the ESA just announced it will be teaming up to do the critical follow-up research.

"We will better understand whether this technique can be used even for larger asteroids, giving us certainty we could protect our home planet if needed," ESA’s Hera project scientist Michael Küppers explained in a statement.