Unexplained high-energy particles are coming up out of the Earth.

Abed may have been onto something in Community when he said he couldn't let go of the idea of parallel timelines, some darker than others. Sure, there's an explanation to be had with Schroedinger's equation within the logic of the show and the dice roll that created those universes, but researchers believe they've found evidence of the potential for a parallel universe in high-energy particles found in Antarctica, according to New Scientist.

The researchers were perplexed by "a fountain of high-energy particles erupting from the ice" in Antarctica at NASA's Antarctic Impulsive Transient Antenna (ANITA). The phenomenon detected is "in pretty strong tension with the standard model of physics," University of Hawaii Physics and Astronomy Professor Peter Gorham said in 2018. These high-energy particles arrive from space, but cannot pass through the solid mass of the Earth. Yet, instead of detecting these particles coming from space or reflecting off the ice, ANITA has found them coming up from the ice. Low-energy neutrinos, per New Scientist, can pass through solid matter like the Earth, but that's not the case with high-energy neutrinos.

MORE: This hypnotic, swirling image may show a new planet being born.

ANITA is a stratospheric balloon designed to detect cosmic-ray showers through radio-wave signals as they bounce up or down off the ice. It turns "an entire continent... into a gigantic neutrino telescope." ANITA has twice detected a "fountain" of high-energy particles coming up from the Earth's surface in years past, with the first time occurring in 2016. The rays resemble an "upside-down cosmic-ray shower," says Gorham. "What we saw is something that looked just like a cosmic ray, as seen in reflection off the ice sheet, but it wasn't reflected," he says. "It was as if the cosmic ray had come out of the ice itself. A very strange thing." 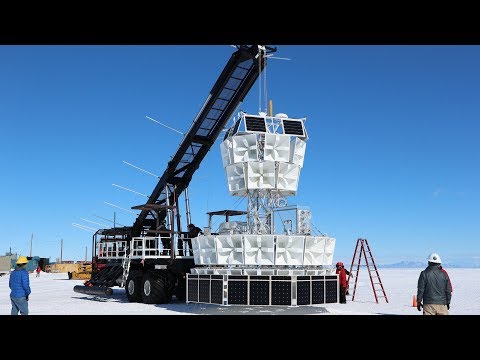 The phenomenon has been reviewed and more easily digestible explanations have been largely ruled out, according to the report, which hypothesizes that the particles may have been traveling back through time, providing theoretical evidence of a parallel universe. New Scientist explained that the "signal requires the existence of a topsy-turvy universe created in the same big bang as our own and existing in parallel with it. In this mirror world, positive is negative, left is right, and time runs backwards." It would be a universe "made of antimatter rather than matter."

The data is still being assessed, and they haven't completely ruled out the possibility that the data is the result of a malfunction with ANITA, per Newshub. Gorham also said that the phenomenon could be "a new class of subatomic particle" that can penetrate all the way through the Earth.

MORE: Here's how to see Mercury, Venus, and the moon together in a rare encounter.

With the options left on the table, none of which include our universe's connection to His Dark Materials, researcher Ibrahim Safa put it bluntly to the New York Post, saying, "We're left with the most exciting or most boring possibilities." The team is still analyzing the latest data from ANITA but hasn't shared its latest findings. "We don't know how to represent it yet," Gorham told New Scientist, "but we've got something."