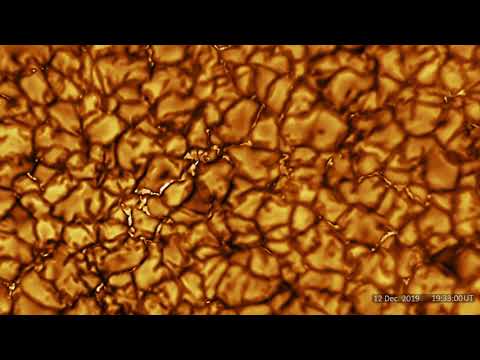 There are two types of people who stare into the first detailed -- and absolutely stunning -- images of the Sun's surface, which were just released this week. There are people like me, who say, that is cool! And there are people like user "Rusty Biesele" on Twitter, who utter:

Regardless, the images are pretty neat for everyone, especially because staring at a telescopic view of the sun transmitted to a computer screen makes our brain think things other than "ow." It's a privilege in these modern times, and we have the National Science Foundation to thank for this. The organization tweeted the Inouye Solar Telescope visual with the message "See the Sun like never before!" on Wednesday.

You can see more images on the NSF blog, as well as an explanation of each image.

"The images show a pattern of turbulent 'boiling' plasma that covers the entire Sun," the NSF wrote on the blog. "The cell-like structures -- each about the size of Texas -- are the signature of violent motions that transport heat from the inside of the Sun to its surface. That hot solar plasma rises in the bright centers of 'cells,' cools off and then sinks below the surface in dark lanes in a process known as convection."

This video, which is three times more detailed than the NSF has ever seen before, is hot AF. These bright spots may explain why the outermost part of the Sun's atmosphere is more than a million degrees... Please recycle, y'all.