Wake Up Sheeple! Conspiracy Theorists Have Proof the Apocalypse is Real This Time

Buckle up. Shit is about to get real. Everyone is going to die and it is a 100 percent certainty because oh my god the apocalypse is definitely, probably, maybe coming, according to some conspiracy theorists who are way more woke than you. The proof is in the blood (moon) pudding.

Here's the deal: The planet Nibiru, sometimes called Planet X, is an imaginary planet that conspiracy theorists posit isn't imaginary. It has a massive orbit that will someday intersect with the Earth's orbit. When that happens, terrible things will happen to this puny planet like earthquakes and other chaos recognizable from the films of Roland Emmerich. That "some day" is now, according to conspiracy theorists who, like the Parks & Rec's reasonabilists, tend to repeat the same claim annually, changing the date of our doom each time they get it wrong.

Last fall, Earth experienced a rare tetrad of blood moons. Blood moons are caused by the moon passing through the Earth's shadow, which is red at the edges, casting a red reflection of the sun across the entire lunar surface. It's beautiful. However, four blood moons in a single year caused quite a tizzy online, with many conspiracy theorists positing that the fourth blood moon in such a short time would trigger a catastrophic chain of events. That was September 2015. 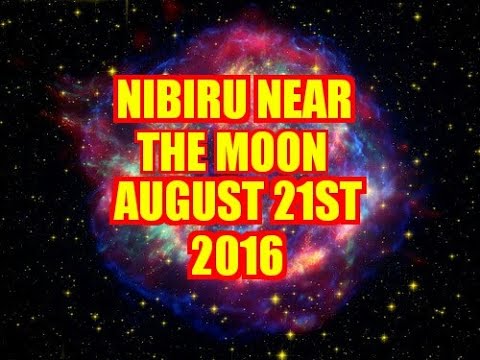 Now, YouTube conspiracy theorists believe that it's actually the year 2016 that will "definitely" see the arrival of Nibiru and the destruction of the Earth as we know it. The Nibiru Planet X 2016 YouTube channel claims it has "proven" a couple of things. Firstly, astronomers missed a blood moon in August, which could bring us to another tetrad. Secondly, the blood moons aren't actually caused by the sun but are instead happening because "planet Nibiru was next to [the moon] and casting its red shadow" on it.

The narrator of the video starts what is just one of many of the channel's apocalypse-related videos saying, "The video you are about to watch is going to change everything you have been taught and everything that you believe in."

Images like the one in the video have been recorded before and are almost always a lens flare, like the series of photos of lens flares the channel posted Wednesday under the title "Astronomer Breaks His Silence on Nibiru." That's not lost on the narrator. "Now, I know a lot of you naysayers will say this is a lens flare," he says, "but save your comments for another time as this is a stationary object next to the moon there is absolutely no doubt about it.

"There is absolutely no doubt there is a planet in our solar system that does not belong there, something we have not seen in our lifetime or this century or the last few centuries of the past." Naturally, this leads to the revelation that the government knows about the pending doom and is covering it up.

"According to these ancient prophesies," he concludes, "the time is now. Prepare."

The soothsayers of YouTube have previously predicted the arrival of Zorp Nibiru and unless this is some Lynchian dream life, the world appears to be no worse for the wear (except for that whole climate change thing). So, no need to stockpile cans of creamed corn just yet.

But who knows, this time there is "absolutely no doubt about it." Should that be the case, congratulations are due to everyone on finally making it to the finish line. We did it. Hail Zorp.