The Northern Lights May Be Visible Over the U.S. Tonight. Here's How to See Them.

This could be the biggest solar storm of 2020.

It may be getting colder, but the night sky is giving you a wagonload of reasons to go outside in the cold. This month will feature the great conjunction (some are calling it the "Christmas star") and the most active meteor shower of the year. December will now also have the potential to host a stunning northern lights display.

The Space Weather Prediction Center (SWPC) has issued geomagnetic storm watches for the night of Thursday, December 10. The brief period of a G3 storm watch (a strong watch level) could mean that the northern lights will be seen relatively far south in the continental United States. Though, the further south you are the more unlikely it is that you're going to see anything. It's important to note that these are forecasts, though. Similar watches for Wednesday night that came from the same coronal mass ejection (CME), highlighted in a previous version of this post, didn't wind up producing the powerful display that was forecast.

The watches issued by the SWPC are a measure of the solar activity hitting Earth's atmosphere. That solar energy can result in the beautiful auroral displays visible at both of the Earth's poles. When an especially strong burst of solar energy from a CME arrives, that can make the aurora borealis visible in areas where it doesn't appear with much frequency. You know, like much of the US.

Those predictions, however, are forecasts and not guarantees. "While SWPC forecasters are fairly confident in CME arrival at Earth, timing and geomagnetic storm intensity are less certain," the center wrote in its alert.

MORE: Jupiter & Saturn Are Coming Together for an Alignment Not Seen Since the Middle Ages

The SWPC has not released a map showing the potential southern reach of the aurora as it sometimes does. The map above or one from the SWPC in September, however, can provide a little context for how far south you might be able to see the northern lights during a G3 geomagnetic storm.

You're looking at an area around the yellow line on the September map. That includes northern Idaho, a sliver of Illinois and Indiana, northern Iowa, Maine, Massachusetts, Michigan, Minnesota, Montana, New Hampshire, northern Nebraska, New York, North Dakota, South Dakota, Vermont, Washington, Wisconsin, and Wyoming, in addition to all of Alaska and Canada. Though, the northern lights aren't exactly a rare occurrence in Alaska and northern Canada.

The map shared by Space Weather Watch also includes parts of Connecticut, Missouri, Nebraska, New Jersey, Ohio, Oregon, Rhode Island, and West Virginia. Those are all possibilities if we're lucky. The further south you go on the map, even inside the marked area, the less likely it is that you're going to see the aurora. Even the northern reaches of that map are never guaranteed.

During the G1 watches (the timing is outlined below), you're looking at the southern reach being closer to the green line on the map from September. That only includes the northernmost parts of the country. It touches the northern parts of Montana, North Dakota, Minnesota, Wisconsin, Michigan, and Maine. 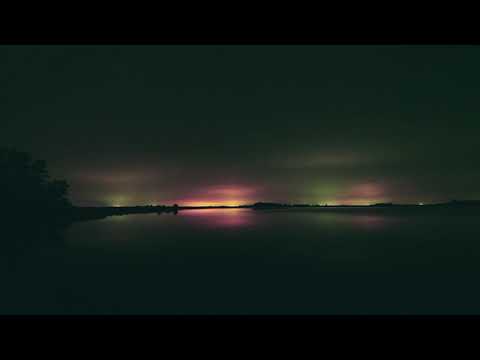 Many variables have to align for the aurora to make an appearance. Nothing can guarantee the lights will show up on any given night, but these forecasts mean the stars are aligning in your favor, if you will. At the time of publication, the SWPC's 3-Day Forecast projects a G1 watch starting early on December 10 with various levels of that lasting until the early morning hours of December 11.

Those watches rise to a G3 watch early in the night, but trail off with the watches ending at 2 am ET at the time of publication. Though, these can change because they're forecasts. A site like Aurorasaurus, the SWPC's 30-minute forecast, or scientists on Twitter like the above-embedded Space Weather Watch are good places to keep an eye on for updates that are closer to real-time.

MORE: The Curiosity Mars Rover Snapped a Gorgeous Selfie on the Red Planet

The northern lights are only visible when it's dark, so the start of the watch on December 10 isn't much use to the casual aurora hunter. But once it's dark out, you'd be safe to start looking if you're inside the area that could expect to see the lights.

For the best view, you need to get away from light pollution, which is harder than most people realize. You need a very dark sky. It's unlikely you'll see the aurora in a city, let alone a major urban hub like Detroit, even though it sits inside the yellow line on the map above. The further you are from city lights, the better your chances. This Light Pollution Map or the Dark Site Finder may help you locate an area with dark skies near you.

You'll also need the weather to cooperate or you're out of luck. An SWPC representative previously told Thrillist, "You need very clear skies, a good view of the northern horizon (no trees, buildings, or hills), and it needs to be dark." The northern lights, seen this far south, will likely be visible along the northern horizon rather than directly overhead.

The key to crossing the northern lights off of your bucket list is persistence and patience. Once you're in your spot of choice, you're going to need to be patient and keep your eyes on the sky. Just because it's not there one moment doesn't mean that it won't be soon. Likewise, if you see it, that doesn't mean it's going to be around all night. It's a bit like whale watching in that way. You're never sure if you're going to see something even when the variables are lining up in your favor.

The northern lights are visible inside the US from time to time but don't take your chance for granted. Especially with the sun near solar minimum, as it is now, there's no guarantee that you're going to have regular opportunities to catch the display. If you have a chance, it's absolutely worth taking advantage of it. If you won't have a good view, maybe it's worth streaming the northern lights as seen from Manitoba. Alien Worlds will still be there when you're back to bingeing tomorrow night.