Researchers Shocked by Massive Ancient Shark Bigger Than Their Submarine 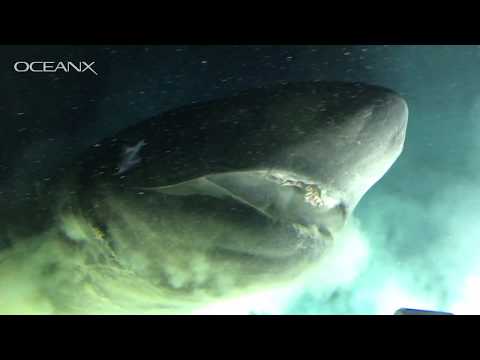 Deep sea researchers are accustomed to encountering the sorts of things most of us will never see with our bare eyes, alien creatures that are equally majestic as they are nightmarish. Still, even seasoned experts are occasionally taken aback by the bewildering unknown, judging by the reactions from a group of scientists scouring the sea floor when they got up close with an ancient shark so big that it dwarfed their own submarine.

While on a recent mission to tag the elusive bluntnose sixgill shark, a team of researchers from OceanX descended in a small submersible in hopes of spotting the deep-sea predator, which has been around since before most dinosaurs. They got their wish and more, though, when they found themselves side by side with a female that turned out to be much bigger than their own vessel. The team captured the whole thing, including their stunned reactions, on video, and the footage is incredible.

"This is a monster," one of the scientists is heard saying, as the curious shark pokes around the strange exterior of the submersible. At one point, she even appears to try and eat one of the guns attached to the underwater vehicle. The whole thing is well worth a watch.

Ultimately, the mission was a success, as the crew was able to put a satellite tag on another one of the bluntnose sixgills they spotted, which will help them track their whereabouts going forward for research purposes.

Just one more reminder that there's a whole world of gargantuan life living below next time you go for a dip at the beach.