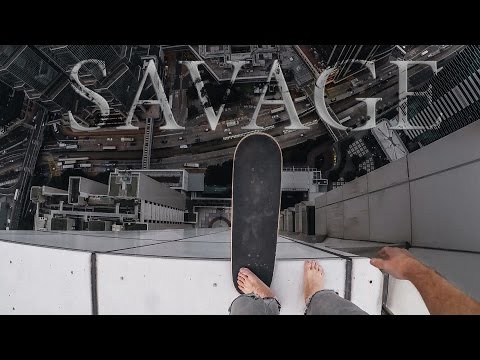 Rooftoppers like Oleg Cricket straddle that line of awe-inspiring and vomit-inducing. (Or is it the line between inspiring and idiotic?) His adrenaline-addicted travels lead him to ridiculous heights that can make your stomach flip from a thousand miles away.

In his latest adventure, Cricket aka Oleg Sherstyachenko dangles from the roof of a Hong Kong skyscraper. He skateboards along the ledge, hangs by his arms, and the trained gymnast from Siberia does some gymnastic feats most aren't willing to attempt at sea level. He did similar gymnastic stunts last summer in Russia hanging from similar heights.

You can hear someone threatening Cricket in Cantonese at one point, so it shouldn't come as a surprise the South China Morning Post is reporting he's under investigation to see whether any crimes were committed in the making of the video. A police spokeswoman said they will "look into the incident." Though it might be complicated because reports indicate they're not sure when the video was filmed or where it was filmed.

Wherever it was filmed, the video has already generated more than 1.1 million views on Instagram and another 600,000 on YouTube.

Dustin Nelson is a News Writer with Thrillist. He holds a Guinness World Record but has never met the fingernail lady. He’s written for Sports Illustrated, Rolling Stone, Men’s Journal, The Rumpus, and other digital wonderlands. Follow him @dlukenelson.
Thrillist TV
History of
The History of Tailgating