The 'Pizza Fork' Now Exists, but It's Unclear Why 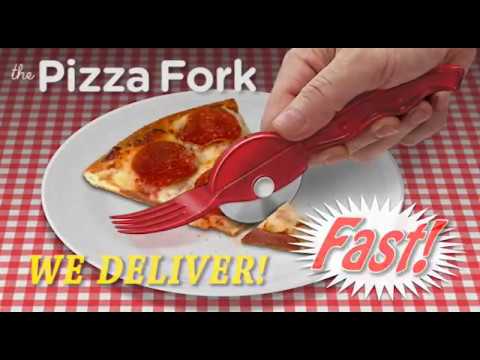 The best practices for pizza-eating are fairly simple: Use your hands; try to keep your mouth closed; fold, if you're into that; and don't stop until you're physically uncomfortable. Nowhere in the above list is a fork mentioned. This is not an omission. Eating pizza with a fork makes about as much sense as eating pizza with a straw. But it's far more forgivable than using a "pizza fork."

What in the name of pepperoni is a pizza fork? It is an abomination before God, to be sure. But it's also a product complete with a Kickstarter and a 5.3cm cutting wheel. In short, it is a fork with a pizza slicer attached.

It's described on its Kickstarter as a "quick and convenient way to single-handedly slice, fork and feed your face." (Another "quick and convenient way" to feed your face is to use your damn hands to bring the food to your mouth.) Honestly, looking at this, it kind of seems like an overzealous eater could jam their lips into the blade. But that does not stop the promo copy from asking, "Who knew you could improve the act of eating pizza." There's a period instead of a question mark though, so maybe they're not asking?

Munchies points out that this product comes via Daniel Morvec and novelty company Stupidiotic, which also sells a plastic neck pouch for carrying a pizza slice. Furthermore, Amazon already sells a similar product.

"What is going on here?" you might reasonably wonder. But the real question is, "Why?" Not why are they selling this, but, like, all-caps shouted from the mountains: "WHY?"

As yet, only 41 people have contributed to this campaign, for a total of $1,526 toward a $10,000 goal. If you're concerned about living in a world where this exists, all you have to do to prevent that is nothing. And we believe you're capable of even less than that.