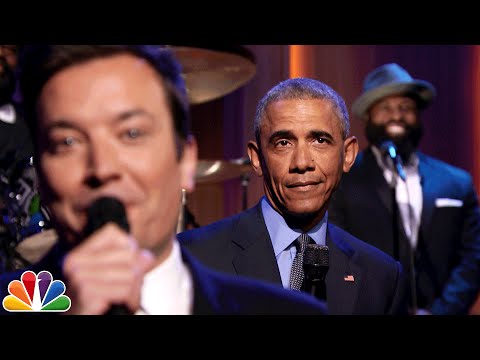 As the 2016 presidential election moves into the most heated part of the race, the presidency of Barack Obama is winding down. With that comes the obligatory round of interviews and guest appearances that can be predictable, dull recaps of the last eight years.

Thursday, he stopped by The Tonight Show with Jimmy Fallon and did his recap, but he also managed to keep things a little lively by joining Fallon and The Roots to slow jam the news for the second time during his presidency. He ran through his accomplishments ("climate change is real, health care is affordable, and love is love"), levied a few burns at Trump ("Orange is not the new black"), and even burned the show's host.

After that, President Obama sat on the couch with Fallon to talk about Trump, Hilary, and advice that doubles as truths about marriages and democracy.

Watch President Obama slow jam the news above, and watch him promise to bring back the "Obama 'fro" in honor of Questlove during Thank You Notes in the clip below.