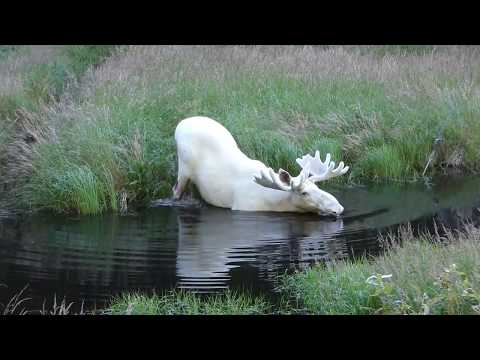 An impressive, albeit brief, video of a white moose chilling in Sweden surfaced over the weekend. For many, it was a reminder that nature remains gorgeous and awe-inspiring, full of things you never even imagined could exist.

The video comes from Varmland in western Sweden. There are only about 100 white moose alive in the world today, according to the BBC. Though it might be your first guess, the white moose isn't actually an albino. It grows white fur due to an uncommon genetic mutation.

The white moose is exceedingly rare, but moose at large are not for the Scandinavian nation. Sweden has more moose per square mile than any other country in the world, according to RT. It has a total population somewhere between 300,000 and 400,000.

Online, people have responded with the appropriate amount of caps lock-inducing wonder.

It's not a bad time for a brief escape to remind you that there's an incredible beauty and calm out in the world still. Watch the video above to see the all-white moose taking a brief dip in a stream.