Roomba Pong Is Definitely Ridiculous, But Goddamn Is It Great 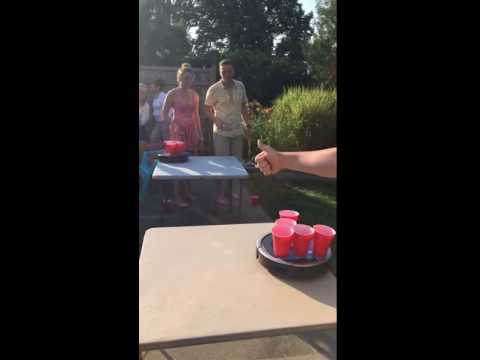 If you've ever played beer pong, you've likely played against (or, regrettably, been) that person who takes the drinking sport far too seriously. You know, the type with firm rules on bouncing, blowing, and exactly how much beer is in each cup. At some point, beer pong is no longer a a challenge for that doofus (or you).

In a brief video uploaded to YouTube by user Megan Noll, you're treated to a simple way to make beer pong that much more difficult: putting the cup formation on a moving target. In this case, that vehicle is a Roomba.

Scant details are available on the genesis of Roomba pong, but the YouTube comments suggest every media outlet alive wants to upload the video natively to Facebook. Expect to see that in your feed this weekend. And suffice it to say, Roomba pong is a pricey drinking game; the cheapest Roomba on Amazon retails for $325, meaning you'll have to shell out $650, plus however much cups and your favorite cheap beer costs. So like $657.

But then again, if you're doing it right, the Roomba cleans up after the party, too. In all, it's win-win. And if you're victorious in Roomba pong, you're looking at win-win-win.

That's a lot of win.