If you travel somewhere spectacular, partake in a thrilling experience, or eat insanely good food without posting it on Instagram, then did it ever actually happen? If that's your philosophy, then 1) maybe calm down a little and 2) now you can finally score something way better than just triple-digit likes for your next stunning adventure photo: a free cruise with three of your friends. For real.

Royal Caribbean announced that it's launching a weeks-long social media contest seeking the "World's Most Adventurous Squad." On March 29, the company will stage the first of five adventure-themed Instagram challenges in which you'll have just 72 hours to post your most impressive travel photo based on each challenge's unique theme. One winner from each challenge will receive a free cruise with their squad (three friends) and will go on to compete against the four other winning squads for the grand prize of three seven-night cruises anywhere that Royal Caribbean sails and $14,175 cash, according to contest's official rules. 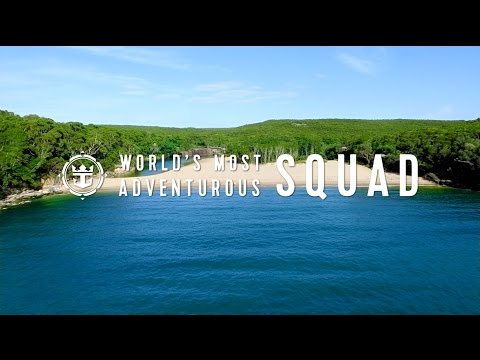 As a teaser video for the contest (shown above) explains, competing in the Instagram challenges is pretty simple. All you have to do is post a photo, video, or Boomerang to Instagram, tag up to three friends that will be on your squad, and include the hashtags #AdventureSquad and #Contest as well as @RoyalCaribbean in the caption. You can even participate in all five of the themed challenges to increase your chances of winning. After a challenge closes, Royal Caribbean will select a winning squad based on "their creativity and spirit of adventure in line with the theme," according to a press release. The winners will be announced in early May.

The five winning squads will then set sail on a seven-night Caribbean cruise in late May/early June onboard the world's largest cruise ship, the Harmony of the Seas. Throughout the trip, the squads will take over the company's social media challenges and compete to post the best content highlighting their experiences on the ship and at destinations like Labadee, Haiti; Falmouth, Jamaica; and Cozumel, Mexico. Finally, one group of friends will be named the "World's Most Adventurous Squad" and will be awarded the aforementioned grand prize.

Of course, the official rules contain plenty of fine print. For example, you have to be at least 21 years-old to be a "Squad Leader" (the person who posts the Instagram photo), you have to have a valid passport, and you have to be a resident of the United States, Canada, (excluding the Province of Quebec), Australia (except Tasmania), Sweden, Finland, Norway, Denmark, or Iceland. So you might want to read the rules before you enter, but by all means start clearing your schedule for the cruises you're about to take first. You know, just in case.

Tony Merevick is Cities News Editor at Thrillist and hopes you like your friends enough to be trapped on a ship with them for days at a time. Send news tips to news@thrillist.com and follow him on Twitter @tonymerevick.