This Record-Breaking 661-Pound Stingray Was Just Caught in Cambodia

The giant stingray weighed in as the biggest freshwater fish in the world.

The world’s largest freshwater fish was just caught in Cambodia, according to scientists.

Earlier this month, Cambodian and American scientists reported finding a 13-foot giant stingray in the Mekong River. The ray weighs a whopping 661 pounds according to a statement Monday by Wonders of the Mekong, a joint Cambodian-US research project.

The stingray was caught by a local fisherman in northeastern Cambodia. After capturing the fish, the fisherman alerted a nearby team of scientists from the Wonders of the Mekong project. Once scientists arrived, they proceeded to measure and insert a tagging device near the tail of the fish. The device will send tracking information for the next year, providing new data on giant stingray behavior in Cambodia.

Scientists were amazed at what they saw, and according to a caption on the Wonders of the Mekong Instagram account, "This is an astonishing, globally significant event and one that also holds deeper meaning because many species of giant freshwater fish face extinction." The Mekong River runs through China, Myanmar, Laos, Thailand, Cambodia, and Vietnam, and according to Wonders of the Mekong leader Zeb Hogan, it’s a wonder that a fish could grow to such a large size, especially because the waterway faces many environmental challenges. 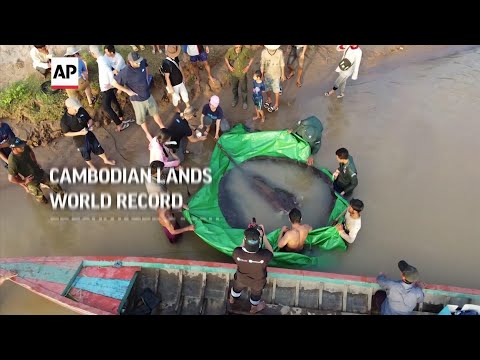 Hogan told AP News that "Big fish globally are endangered. They’re high-value species. They take a long time to mature. So if they’re fished before they mature, they don’t have a chance to reproduce." Hogan also added that "A lot of these big fish are migratory, so they need large areas to survive. They’re impacted by things like habitat fragmentation from dams, obviously impacted by overfishing. So about 70 percent of giant freshwater fish globally are threatened with extinction, and all of the Mekong species."

Surprisingly enough, the recent giant discovery isn’t the first discovered in the Mekong River. The previous record for biggest freshwater fish was a 646-pound Mekong giant catfish, which was discovered in Thailand in 2005. Researchers are saying that this is the fourth giant stingray reported in the same area in the past two months. Because all of the giant fish finds have been female, they think this may be a spawning hotspot for some species of fish.

Once tagged and measured our big girl was let back into the wild to swim about. Local residents named the stingray ​"Boramy," which translates to "full moon," after the giant stingray's round shape and because the moon was on the horizon when the stingray was freed on June 14.