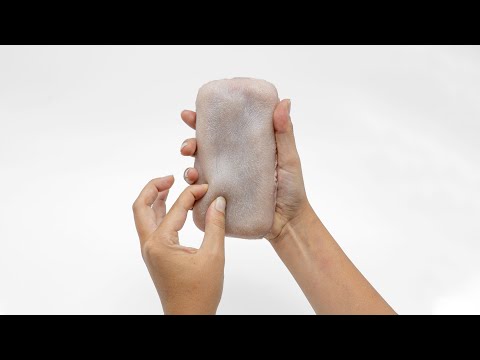 Her is my favorite movie. It’s about a lonely man who falls in love with his computer software, but can’t spoon her at night because the computer is just the voice of Scarlett Johansson in a box. But maybe lonely men everywhere will one day be able to spoon their software after all, because people are designing skin you can put on your devices. The technology is called “Skin-On.”

The new tech was part of a team research project conducted at Bristol Interaction Group in the United Kingdom. The group, Telecom ParisTech, set out to improve “interface control” on their devices by allowing you to connect with it on a maybe-sacrilegious level.

“Human skin is the best interface for interaction,” the organization's website reads. “I propose this new paradigm in which interactive devices have their own artificial skin, thus enabling new forms of input gestures for end-users.” Oh yeah? ;)

“I wanted to pinch my phone,” one of the researchers, Marc Teyssier, told New Scientist. The new technology enables a user to, for example, tickle the “skin” to produce a laughing emoji.

“From a gestural point of view, I explore how gestures naturally performed on the skin can be transposed to Skin-On interfaces,” per the website. “I use this knowledge to propose a series of gestures that are desirable for Skin-on interfaces (e.g. multitouch touch, pressure and complex gestures such as strokes, stretching or grabbing).”

The website breaks down the “fabrication process” to explain how the texture is achieved, which involved a top textured layer, electrodes, and an actual hypodermis (the bottom layer connecting the skin to the fibrous tissue of the bones and muscles).

The case doubles as a laptop touchpad that responds to the typical scrolling up and down gestures, except now you can feel physically intimate with your technology and escape the hellhole that is your lonely, hollow existence -- if that's a problem for you. Plus your touch will be more, like, precise… I guess.

The Skin-On interfaces come in two versions. The first is called the “simple version,” which looks like a more peach-colored, less detailed version of human skin. The second is the more realistic version, which is the stuff of nightmares... Unless your phone loves you, cares for you, and speaks with Scarlett J's subtly seductive rasp.