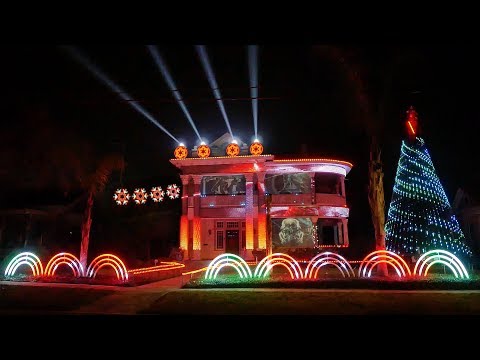 Like a Star Wars Holiday Special come to life, this Christmas light display is wildly excessive and hard to turn away from.

Put together by Matt Johnson and Living Light Shows, the house is covered in lights, projection mapping, and spotlights that dance to an EDM version of "The Imperial March." (Johnson was also behind a viral Christmas light show in 2015.) It even comes with projections of Darth Vader and a nearly seven-foot-tall Vader mannequin playing Christmas tree angel of death atop a 30-foot light tree.

The lights are well-timed with the music, and the display is well-timed with the divisive release of Star Wars: The Last Jedi. Though, the house avoids Star Wars controversy by sticking with Darth Vader instead of going with Snoke and classic lines like, "Oh, such spunk."

If you feel an intense desire to stand in front of this oddly columned house you can probably see from space, it's in downtown San Antonio at Dignowity Park and will be flashing brightly from 6pm to 10pm every night until New Year's Eve, according to the YouTube page description. The light show probably goes great with a warm glass of thala-siren milk.

Sign up here for our daily Thrillist email, and get your fix of the best in food/drink/fun.
Dustin Nelson is a News Writer with Thrillist. He holds a Guinness World Record but has never met the fingernail lady. Follow him @dlukenelson.
Thrillist TV
Wine and Cheeseburger
Our Newsletter