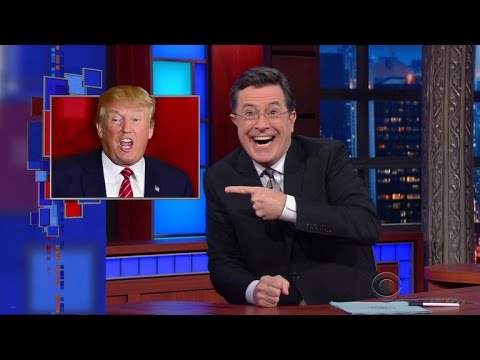 Stephen Colbert's first year as host of The Late Show with Stephen Colbert saw the triumphant return of Jon Stewart to late night TV, the surprise resurrection of his old Stephen Colbert character, and even a special Super Bowl appearance by President Barack Obama, among other big moments. To mark his 1-year anniversary at the show last week, Colbert released a supercut of all his best roasts so far, and let's just say Donald Trump comes up a few times.

It's no secret that Colbert has the uncanny ability to turn a few introductory words about someone into hilarious burns based on their appearances, and thankfully, he's done plenty of this over the last year. Watch as he roasts people like "Kentucky county clerk and forehead magnate" Kim Davis, "rival candidate and leaking beanbag chair" Joe Lieberman, and "CNN correspondent and the Legolas of cable news" Anderson Cooper, among many others. And while politicians like Marco Rubio, Ted Cruz, John Boehner, and Ben Carson are needled with plenty of stinging one-liners, Donald Trump is unsurprisingly -- and hilariously -- roasted the most. Stephen Colbert shows no mercy.

With that said, just imagine what he's got up his sleeves for year two.

Tony Merevick is Cities News Editor at Thrillist and burst out laughing at the Joe Pesci corpse double line. Send news tips to news@thrillist.com and follow him on Twitter @tonymerevick.
Our Newsletter