If you're going to run a marathon, it's important to train for a while before so you can make it through... 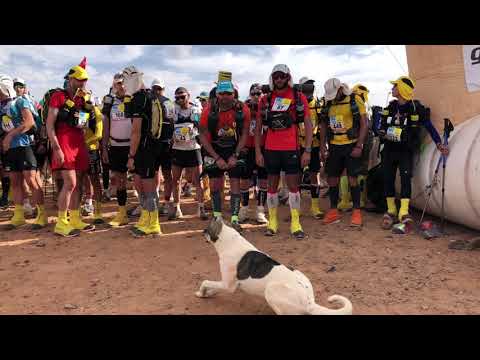 If you're going to run a marathon, it's important to train for a while before so you can make it through. Though if you're going to run the Marathon des Sables -- the annual six-day ultramarathon across the Moroccan desert that covers 140 miles and is considered the "toughest foot race on Earth" -- you'll need months to whip your body into shape. That is, unless you have the physical fortitude of a dog named Cactus, who decided to join this year's mega race and somehow finished in a very respectable 57th place.

Oh, and you better believe he got a medal.

As the long-haul Marathon des Sables 2019 entered its second day on Monday, April 8, an unusual competitor joined the ranks of the nearly 1,000 runners mid-way through the course: a spry and cute stray dog. Once the four-legged course-crasher completed the remaining 15 miles that day, folks began calling him Cactus for some reason, according to Travel & Leisure. Then, when runners got to the temporary camp at the end of the day, he stuck around overnight to rest with the athletes and must have slept pretty well, because the next day he got up and continued on to Stage 3 of the course. That day, he ran the full 23 miles, and proved himself less a race mascot and more a worthy opponent.

Since Cactus clearly didn't come prepared to run with any of the supplies and endurance-sustaining snacks that the registered runners did, folks along the way made sure he was in good shape. He was fed, given plenty of water, and had his paws checked for blisters. Race officials even strapped a GPS tracker on him so his growing fanbase could follow his progress, and he became somewhat of a local celebrity on social media.

On the next day, Cactus showed no signs of slowing down, and pushed through Stage 4 -- the longest of the race -- where he ran the full 47 miles in an impressive 11 hours, according to Sports Illustrated. For perspective, human runners are given a full 31 hours to finish the punishing route.

Cactus completed the race on Friday and crossed the finish line in 57th place, becoming the first dog to ever race the MDS, and was even given a medal.

So, just remember, if a homeless dog can run the the world's toughest race in the middle of the desert on a whim and come in 57th place, you can probably survive that charity 5K you've been dreading.

Do it for Cactus.