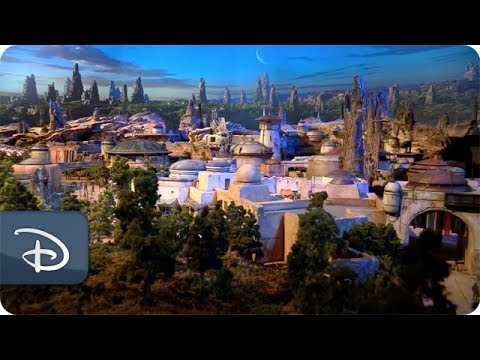 Some of the greatest entertainment franchises are getting real-world makeovers. Not long after Nintendo’s announcement of Super Nintendo World in June, which is destined to open in Osaka, Japan by the time the 2020 Olympics are underway, Disney has unveiled a physical rendering of Star Wars Land, which aims to transport tourists to another galaxy far, far away, but IRL.

Unveiled at the Disney Fan convention D23, Star Wars Land is the culmination of your sci-fi nerd fantasies. The company notes that two Star Wars-inspired worlds are under construction at California's Disneyland and the Walt Disney World Resorts in Orlando, Florida.

Disney says attendees should expect to get immersed in the thick of the action. You'll be able to conduct a mission at the helm of the Millennium Falcon, and there’ll also be the chance to participate in a fierce war between the First Order and the Resistance. Whether or not you can lightsaber battle the space-faring emo kid Kylo Ren is still unclear.

A miniaturized version of the both Star Wars Land parks will be on display at D23 in Anaheim, California this weekend, and the company has provided visuals. They are small renderings, but also very elaborate, because hey, this is Star Wars and the details matter. The finished, 14-acre parks are expected to be finished by 2019, costing Disney a cool $1 billion in the process, according to Mashable.