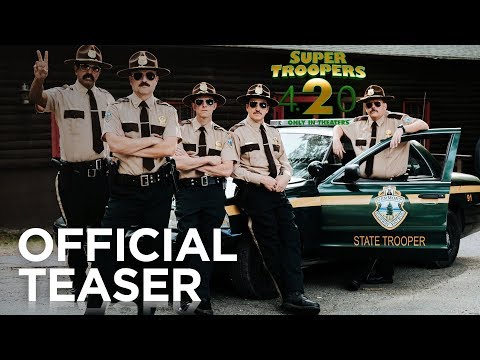 Fans of the bro-comedy canon, get your mustaches ready. The first trailer for Super Troopers 2 has arrived, and it looks like a worthy sequel to the 2001 cult-classic that popularized the word "meow" and convinced way too many impressionable kids to chug maple syrup. The ensuing one-minute clip should transport you back to the halcyon days of the original Super Troopers, when Mac, Thorny, Rabbit, Farva, and Foster were simultaneously the worst and most lovable Vermont state troopers in cinematic history.

Seventeen years later, though, it appears the usual antics are all set to take place in the new film, which comes out next year on the very significant date of April 20. The trailer opens in a familiar place -- the guys' locker room -- in which they're ginning up a plan to shave Rabbit's balls. In a later scene, there's subtle reprising of the infamous meow scene. It appears not much has changed over the years, which by all measures is a good thing.

We first got intel that the film had a release date earlier this month, which was a bit of welcome news after years of monetary setbacks delayed production. Broken Lizard, the comedy troupe behind the film, struggled to crowd fund its production costs, but finally got enough scratch together to bring the sophomoric shtick out of retirement.

For anyone who found the first movie uproarious, this is joyous news.


Sam Blum is a News Staff Writer for Thrillist. He's also a martial arts and music nerd who appreciates a fine sandwich and cute dogs. Find his clips in The Guardian, Rolling Stone, The A.V. Club and Esquire. He's on Twitter @Blumnessmonster.
Thrillist TV
History of
The History of Tailgating