Everyone has a different definition of paradise. For some, it’s an oasis centered on relaxation, for others it’s a Taco Bell-themed hotel in sunny California. We’re not saying either is right or wrong, but getting to eat endless tacos at the...

Everyone has a different definition of paradise. For some, it’s an oasis centered on relaxation, for others it’s a Taco Bell-themed hotel in sunny California. We’re not saying either is right or wrong, but getting to eat endless tacos at the latter does sound pretty good. Well, it turns out such a place will actually exist this summer, when the Crunchwrap maker opens a luxury hotel experience called The Bell.

The Bell will open its doors to Taco Bell diehards in Palm Springs, California for a limited time, starting on August 9, a spokesperson told Thrillist. The temporary destination will have swanky rooms and no shortage of opportunities to sip a Baja Blast by the pool, or catch some rays on a Hot Sauce packet pool float. There will also be a gift shop with T-Bell hotel apparel and accessories, and even an on-site salon offering Taco Bell-inspired nail art, haircuts, and braids. Obviously, there will also be plenty of Taco Bell food on hand to enjoy during your stay, including several new and exclusive menu items the chain has yet to reveal. 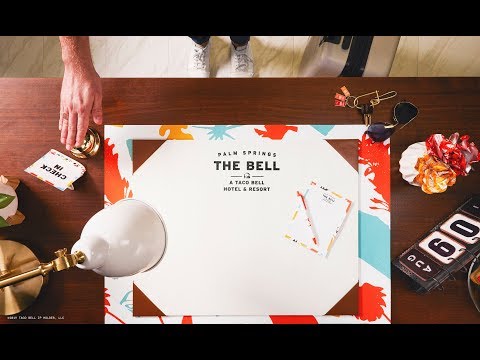 “The Bell stands to be the biggest expression of the Taco Bell lifestyle to day. It will be fun, colorful, flavorful and filled with more than what our fans might expect,” Taco Bell’s Chief Global Brand Officer Marisa Thalberg said in a statement. “Also, just like some of our most sought-after food innovation, this hotel brings something entirely new for lucky fans to experience and enjoy.”

Not just anyone can book a stay at the Taco Bell Hotel, though. Reservations will open in June, and they’ll definitely fill up fast. Basically, you snooze, you lose with this deal. Taco Bell will announce more information about how you and the T-Bell lover in your life can stay at this unusual vacation hot spot in the coming weeks, so keep it locked on the chain’s social media sites to avoid missing out.

This isn’t the first time Taco Bell has ventured into hospitality, but perhaps it’s most ambitious. In 2016, Taco Bell fans in Ontario, Canada were afforded the once-in-a-lifetime opportunity to spend a night in a Taco Bell, which it dubbed a “SteakCation.” The taco chain set up a bunk bed, couch, and side tables in the middle of one of its restaurants. The setup provided a picturesque view of the ordering counter. Sounds pretty priceless to us.

Sign up here for our daily Thrillist email and subscribe here for our YouTube channel to get your fix of the best in food/drink/fun.
Caitlyn Hitt is Daria IRL. Don't take our word for it -- find her on Twitter @nyltiaccc.