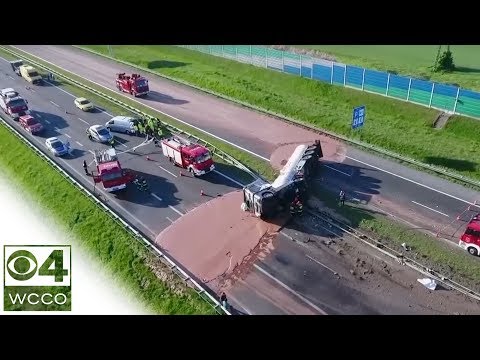 The commute on a major highway literally turned into a sticky situation early on Wednesday morning, when a tanker truck crash and overturned, spilling 12 tons of liquid chocolate across both directions of the roadway. The bizarre spill stranded hundreds of drivers behind a milk chocolate moat that quickly molded into a massive, four lane-wide candy bar.

The cause of the crash has not yet been determined and the tanker driver fortunately only suffered minor injuries, but the Willy Wonka-esque scene turned into a giant mess along the stretch of highway where it occurred, just outside the town of Slupca in western Poland.

Authorities said the liquid chocolate began to cool rapidly, which caused it to solidify on the surface, obstructing traffic in both directions. Contrary to what your sweet tooth may suggest, making literal tons of chocolate disappear is actually a difficult task.

"Cooling chocolate is worse than snow," said one official responding the the accident, per a report by Kontakt24.

Crews used streams of hot water to try and melt the mess away, and a bulldozer was used to help push the mammoth treat off the road, though it still took hours before traffic could resume.

Then again, it's possible the whole thing could have been cleaned up faster if authorities had simply handed out some graham crackers and marshmallows to the drivers stuck in traffic for some roadside s'mores.