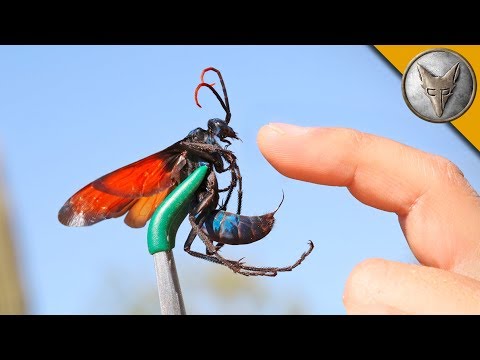 Did you know there’s an insect sting pain index? Well there is, and it contains all sorts of exotic bugs that can make big, strapping men weep by force of their rampaging stingers.

Take the Tarantula Hawk for instance. It’s a giant wasp that lives in the desert and hunts tarantulas. Some genius decided to get stung by one and document the charade on YouTube for your sadistic enjoyment.

The sacrificial lamb in this stunt is Coyote Peterson, the host of the web series Brave Wilderness. After overcoming great fear and trepidation, Peterson takes the wasp’s quarter-inch stinger on the forearm, and immediately falls to the ground to start writhing in pain.

The Tarantula Hawk is ranked on entomologist Justin Schmidt’s sting index at a pain-rating of 4 -- the highest possible degree of pain. According to Schmidt’s data -- and Peterson’s repeated claims -- the wasp has second most painful sting of any insect in the world. The bugs are small creatures, and they generally pose no threat to humans, but to their arachnid prey, they’re much more devastating. The wasps use tarantulas to procreate, stinging them in the abdomen -- which causes permanent paralysis -- and then lay their eggs in the spider’s body. The wasp larvae eventually devour the tarantula from the inside while it’s still alive. (Isn’t nature beautifully macabre?).

As you can see, Peterson complains about a momentary paralysis in his left arm after being stung. Luckily, the pain and lack of movement only last an agonizing five minutes, although the swelling and itchiness endures well into the next day.