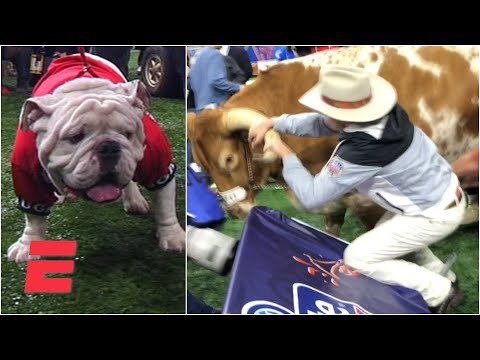 Whether or not you know the Rose Bowl from the toilet bowl, you will agree that college football mascots engaging in unplanned mortal combat is riveting entertainment. If you have any doubts about that assertion, we encourage you to watch this video.

To set the stage here, the Allstate Sugar Bowl was played on Tuesday night between the Texas Longhorns and the Georgia Bulldogs. Appropriately, the Bulldogs have an actual English bulldog for their mascot, named Uga. The Longhorns also have an actual longhorn as their mascot, named Bevo. This information alone is charming, but things took an incredible turn when a photo-op was staged for the two animals.

Bevo, the 1,800-pound steer, attacked the Uga, the 62-pound bulldog. The steer broke out of its make-shift corral and generally caused a ruckus on live television. Thankfully, Bevo's 58-inch horns didn't cut the 5-year-old Uga's life short (technically, this is Uga X -- and no one wants a new UGA XI any sooner than necessary). No people were hurt either.

If you don't feel like watching the full video, here's a clip of just the attack.

"We were trying to turn him around to take a picture, and he made a run for it," Patrick Dowell, one of Bevo's handlers, told ESPN. "He was just going to say hi.”

Here's another angle. You decide for yourself if this looks like an attempted greeting.

"I had him turned around," Charles Seiler, who was handling Uga X, explained to ESPN. "He heard it and he didn't wait. He ran. And I ran.”

They ended up going forward with the photo-op anyway, so it all ended well. Unless you were the Bulldogs, who lost.

And the prophecy was fulfilled.

James Chrisman is a News Writer at Thrillist. Send news tips to news@thrillist.com and follow him on Twitter @james_chrisman2.