What is the Difference Between Red and Green Peppers? 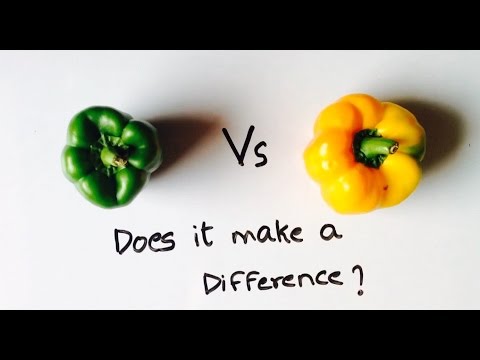 It's definitely quicker to buy one of each at the grocery store than it is to stand in the produce section Googling the difference between red, yellow, orange, and green bell peppers. It also makes you look health conscious instead of confused when you roll up to the counter with a technicolor bag of peppers.

The answer is pretty simple. You've undoubtedly noticed a green pepper with a little red spot, or a yellow pepper that's green on one side. That discoloration gives away their secret. The ripeness of the pepper will dictate its coloring and flavor, and green peppers are the unripe version of red, yellow, and orange peppers.

Green peppers are unripe versions of red, yellow, and orange peppers. They will grow into yellow, orange, or red peppers. When the pepper is green and less ripe, it tends to have a slightly bitter taste that isn't quite as popular with the kids. (It can also cause digestive issues for some people.) As it ages, the pepper sweetens.

That should be enough information about a simple question to help you become the annoying person lingering in the kitchen the next time you're invited to a dinner party. If that doesn't get you knocked off the invite list for next time, consider pontificating on the history of the baby carrot.


Dustin Nelson is a News Writer with Thrillist. He was shocked to discover that people dislike green peppers. Follow him @dlukenelson.
Thrillist TV
History of
The History of Tailgating