The Ice Cream- and Activism-Filled History of Ben & Jerry's

Ben & Jerry's is famous for its ice cream, but it's also known for its activism. 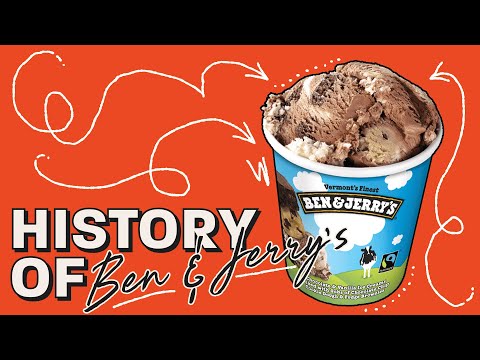 Ben & Jerry's. The Vermont-based ice cream maker has been in the game for a long time and it’s managed to find a way to do more than just supply us with delicious pints for midnight binge-eating. Ben & Jerry’s has become a voice for the people, whether that’s about what the people behind the company want to see in their ice cream or systemic change.

How does an ice cream company go from a small outfit to a major supplier? It all started in 1978 when Ben Cohen and Jerry Greenfield, who met in seventh grade gym class on Long Island, opened their first-ever ice cream parlor. They set up shop in a renovated gas station in Burlington with a $12,000 investment. That’s small potatoes in the business world.

Initially, Cohen and Greenfield set sights on bringing Long Island’s famous (for good reason) bagels to the Northeast, but bagel-making equipment isn’t cheap. It’s probably for the best. New York bagel stores are a dime a dozen, but really good ice cream is hard to find. How they made the jump from bagels to ice cream we may never know, but we’re eternally grateful. Ben & Jerry’s is a fast favorite among Vermonters and word travels far and wide.

After five years of astounding success, Cohen and Greenfield decided it was time to expand. In 1983 they opened more scoop shops and the buck doesn’t stop there. They also landed a deal to start selling pints of Ben & Jerry’s in retail stores throughout the Northeast, meaning no more loading up the car and driving for hours to satisfy your ice cream cravings. Naturally, Cohen and Greenfield put a lot of thought into their pints. They couldn’t just put any old ice cream on store shelves and expect it to thrive. Have you been down an ice cream aisle this century? It’s a minefield of choices!

There’s one problem, though, and it eventually becomes Ben & Jerry’s signature: Cohen has a serious case of a condition called anosmia, meaning he can’t smell or taste. For one, that means he’s never fully tasted any of the delicious flavors Ben & Jerry’s scoops up at their shops. A tragedy by any other name. What’s more, it means he has to get really creative when combining flavors. Cohen relies on “mouthfeel” when mixing up his diet and applies this same principle to Ben & Jerry’s pints and in-shop flavors. Enter Ben & Jerry’s signature chunks. Thank you, Cohen, and thank you, anosmia.

Ben & Jerry’s first flavor to hit store shelves was Chocolate Chip Cookie Dough. This flavor is a classic and has been done by just about every ice cream brand out there, but Ben & Jerry’s does it, and all its flavors, it’s own way and it pays off. Ben & Jerry’s becomes a hit in Vermont and beyond. Its competitors start taking notice. Haagen Dazs, for example, fired shots in Boston, telling local retailers that if they want to continue selling their brand, Ben & Jerry’s must go.

You may think Ben & Jerry’s would back down, but much like Mark Wahlberg in Patriots Day, the company decides to fight back. It launches a campaign against Haagen-Dazs’ parent company, urging fans of their ice cream to call Pillsbury and ask, “what’s the Doughboy afraid of?” Folks, we kid you not, this campaign works. Haagen-Dazs backs down and the two ice cream brands continue to appear on store shelves in harmony while Ben & Jerry’s continues to grow as a company.

In 1986, they hit the road in their “Cowmobile” to hand out free cones across the country and spread the word about their brand. Everything’s fine and great until Ben & Jerry’s start heading for home and the “Cowmobile” goes up in flames. Cohen joked that it looked “like the world’s largest Baked Alaska,” which is quite an image and definitely a bummer, but the trip was worth it. In 1987, following Ben & Jerry’s maiden voyage cross-country and the release of it’s Cherry Garcia flavor (named for The Grateful Dead’s frontman), the company is officially playing with the big dogs in the ice cream game.

No, seriously. By that point, Ben & Jerry’s is a $30 million business and its ice cream is sold in 35 states. Imagine how many cones you could buy with $30 million. While some rich business owners may have run off with their millions and forgotten the little people, Ben & Jerrys decides to give back. In 1988 the company starts a non-profit organization with the aim of redirecting 1% of the national defense budget toward peace-promoting activities instead. Groovy, baby.

That’s just the start of Ben & Jerry’s foray into activism. In 2005, the company constructed a 900lb Baked Alaska, passing out slices on the US Capitol’s lawn, in protest of oil drilling in the Arctic. In 2009, the company changes the name of its Chubby Hubby flavor to Hubby Hubby after Vermont becomes the fifth state to legalize same-sex marriage. In 2016, B&J hit the US Capitol again to hand out pints of Empower Mint ice cream to members of Congress along with a letter asking that they start working to reverse the Supreme Court’s 2013 gutting of the Voting Rights Act. Later that same year, Cohen and Greenfield are arrested at the Democracy Awakening protests.

The latter proves to people that the Ben & Jerry’s founders aren’t playing around and are so much more than catchy ice cream titles. As of 2020, the company is ahead of the curve in corporate social responsibility. It recently released a statement about white supremacy and police brutality, so people can continue to tell Ben & Jerry’s to “stick to ice cream” but don’t hold your breath.

It’s hard to believe this little company, started in an old gas station in Vermont, grew into what Ben & Jerry’s is today. The company hasn’t run out of flavor combos in the 42 years it’s been slinging scoops and we can’t wait to see what it serves up next.

Caitlyn Hitt is Daria IRL. Don't take our word for it -- find her on Twitter @nyltiaccc.
Thrillist TV
Wine and Cheeseburger