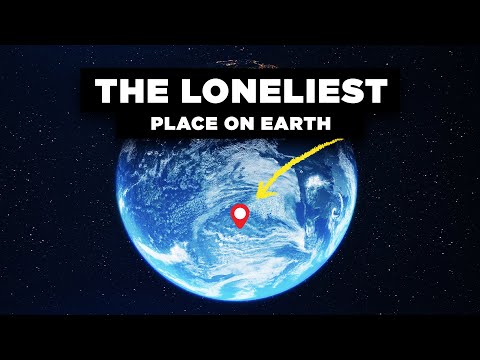 Considering the ongoing horror that has been the year 2016, we really wouldn't blame you if you need a break from human civilization. Escaping to one of the world's most stunning off-the-grid beaches will probably do the trick, but what if you wanted to literally get as far away from other people as possible without taking Elon Musk up on that Mars trip? Well, a new video from RealLifeLore reveals the loneliest places on Earth.

Turns out there are actually a few distant places across the globe that have yet to be populated by humans. For example, Devon Island in Canada is about the size of Croatia and home to literally zero people, although some 229 people live on a neighboring island about 50 miles away. On the other hand, Tristan Da Cunha in the south Atlantic Ocean is the most remote location in the world that is home to a few people (about 264 of 'em), with about 1,243 miles separating them from the closest place with other people, according to the video. So, basically, you've got some options, depending on how misanthropic you're feeling.

As for the absolute loneliest and most remote spot on this giant blue marble, you'll have to venture way out into the center of the Pacific Ocean. The exact spot is called Point Nemo, and although there's no land there, it's a staggering 1,670 miles away from the nearest place populated by people. For perspective, if the International Space Station passed over Point Nemo at its orbit of about 249 miles above Earth, the astronauts aboard would actually be closer to you there than other people on the surface, according to the video. Getting there takes at least 15 days by ship, too, which is just nuts. Or maybe exactly what you're looking for. In any case, hang in there -- only about 20 more days to go 'til 2017 comes to save the day.

Tony Merevick is Cities News Editor at Thrillist and can see why dreaming of such a place is appealing after the year we've had. Send news tips to news@thrillist.com and follow him on Twitter @tonymerevick.
Thrillist TV
Wine and Cheeseburger