These People Made 'The Simpsons' Kitchen in Real Life 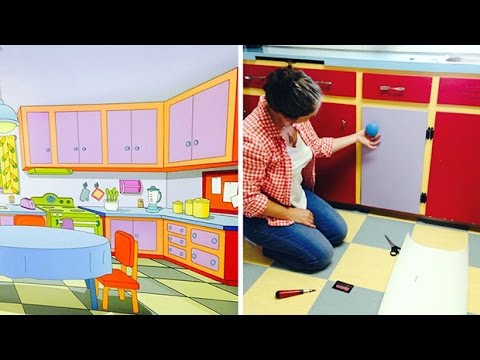 Marcia Andreychuk and Joel Hamilton love "The Simpsons" so damn much that they've remodeled their kitchen to be a replica of the colorful cartoon canteen where Homer chowed down on countless meals... well, at least the ones he didn't eat on the couch. Specifically, the kitchen features a checkerboard tile floor, cabinets adorned with bright blue doorknobs, and even Marge's corn cob-patterned curtains, which Andreychuk sewed herself, according to a report by CBC. Now, all she's missing is a 3ft blue beehive on her head.

And for an added touch of authenticity, the couple is saving for olive-green appliances -- kind of like the hideous old refrigerator at your grandma's house. While work on the Homer improvement project continues, Andreychuk joked about someday converting their basement into Moe's Tavern, according to the report. Obviously, it should be stocked with the new, real-life Duff beer. Although having Barney over all the time would probably be more trouble than it's worth.

Tony Merevick is Cities News Editor at Thrillist and is currently designing a custom kitchen design inspired by Bag End. Send news tips to news@thrillist.com and follow him on Twitter @tonymerevick.