This Video of 3 Humpback Whales Breaching Simultaneously Is Insane 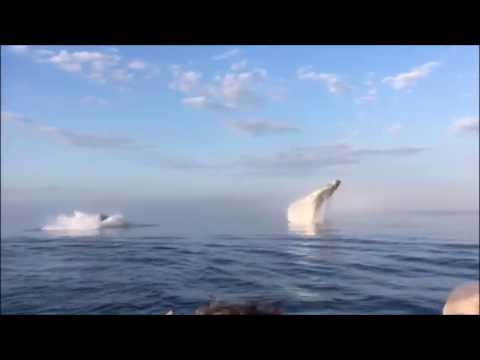 When you go out on a whale-watching trip, there's always a bit of you hoping to get soaked by a breaching whale. You may even feel a bit let down if it doesn't happen. In the video above, no one gets soaked, but we're pretty sure no one was let down.

In short, three humpback whales hurl themselves out of the sea in rapid succession with all the grace and moxie of a high-school synchronized swimming team. Except this troop was made up exclusively of large aquatic mammals. This rare spectacle took place off the coast of Nova Scotia and, lucky for the rest of us, was caught on video by those on board.

The footage was shot on August 17 by a passenger on the Zodiac boat named Edward Giroux. But the real star of the show here -- besides on the sublime, shockingly well-coordinated whales, of course -- is the expedition's guide, who simply cannot stop shouting, "It's going to be a triple breach!" It's as grating as it is informative.

Some commenters thought that the tour boat was too close to the whales and accused them of riling the humpbacks up. The company, Ocean Explorations Zodiac Whale Cruises, claim that the whales originally approached them and were interacting with the boat before breaching.

A Facebook post with the video elaborated further: "There have been several comments about US disturbing the whales, 'waking them up' ... driving up to them etc. .. none are true. ... The whales surfaced after a dive and swam and/or drifted over to us. One 'interacted' with us before joining the other two 'logging' for many minutes before the 'take off'. We did not (ever) approach the whales or 'wake them up'. Thx for your interest (including 'concern')."

While not all whale-watching tours will feature something as amazing as this, some have had surprising success with paddleboards.