The first lunar eclipse of 2022 shows up this weekend. Here's how to see it.

A red moon will hang in the sky over the US Sunday night.

A total lunar eclipse will take place on the night of May 15. For the first time this year, the moon will sit inside the Earth's shadow or umbra, blocking the reflection of sunlight during the night of a full moon.

The period of totality is marked by the entirety of what we see of the moon being covered by the Earth's shadow, a period when it will turn a ruddy red. That's when you want to be out looking at the moon. Prior to that point, the moon will simply show some of Earth's shadow. It won't get that red hue until totality begins.

Where is the lunar eclipse visible?

Parts of the eclipse will be visible throughout the Americas, Europe, and Africa, according to NASA. Stargazers in the US and South America will get a nice view of the total eclipse.

If you're on the US's east coast, you'll see the moon sitting high in the sky during the eclipse. The further west you reside, the lower the moon will be in the sky. If you're all the way over on the west coast, you'll want to stargaze from a place with a clear view along the horizon. Otherwise, you might wind up with the moon obscured by nearby trees or buildings.

How to stream the lunar eclipse online

If you have cloudy skies or can't manage to get outside on Sunday night, you can view the eclipse online. There are a few sources hosting a live stream, including NASA, which says on its YouTube page that its stream will start at 10 pm ET.

You can watch that live stream on the player below. 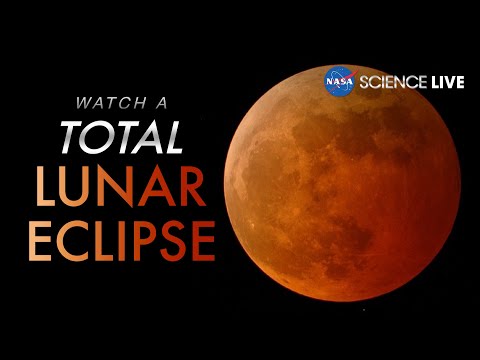 When is the next lunar eclipse?

May's eclipse is the first of two lunar eclipse in 2022. The second will arrive on November 8, 2022, per Space.com. That one will be partially visible in North America.