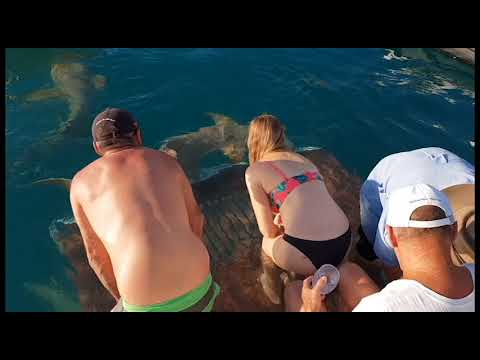 Signs are important. It is often tempting to ignore the signs. But read them. If you do not read the signs, you will be dragged into the watery depths by a shark.

For absolute proof of this principle, watch the video above. In it, a woman named Melissa Brunning is vacationing in Australia and feeding tawny nurse sharks from a boat in Dugong Bay. There are warnings posted not to feed the sharks, but she feeds the sharks.

Inevitably, she is dragged into the watery depths.

“This is not a shark attack,” she later told the West Australian. “This is just a blonde doing a stupid thing.”

"I came up and I said, 'I've lost my finger' and I couldn't even look at my finger because I thought it was gone," she said. "And I thought if I looked at it I'd probably go into shock."

As it turns out her finger remained intact, but she was eventually treated for an infection at the hospital.

She also said that she doesn't blame the shark and "the incident has taught her to respect marine life." But that's the wrong takeaway.

The lesson here is to read the signs.