Tourist Grabs Beautiful Octopus & Has No Idea It Can Kill

A tourist visiting Australia has achieved notoriety for an unfortunate reason. The unnamed traveler shared a video of themselves handling a blue-ringed octopus. 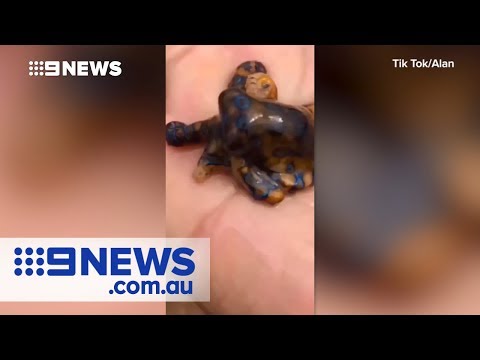 A tourist visiting Australia has achieved notoriety for an unfortunate reason. The unnamed traveler shared a video of themselves handling a blue-ringed octopus. The tiny cephalopod is cute, but they're fortunate this isn't a sad story.

The blue-ringed octopus is venomous. Its saliva contains a neurotoxin that causes paralysis and respiratory failure. The venom is a thousand times more powerful than cyanide, and it has enough of it to kill 26 humans within minutes, according to the Ocean Conservancy. Moreover, the bite can barely be felt, so many victims don't know they've been bitten until it's too late.

At first glance, the video appears charming, but this clearly could have turned into a very bad situation.

The video was shared on Reddit on January 27, where it appears to have been re-posted from TikTok. The post, shared on r/Australia, is loaded with comments from incredulous Australians who clearly know better.

As highlighted by Gizmodo, there's one terrifying story about an encounter in the comments. The person was stung and left paralyzed on a beach with their eyes open under the bright sun. "They survived, but nobody had really thought about the fact they’d been staring up into full midday sunlight for a couple of hours throughout the process with their eyes wide open," the commenter remarked.

This close call is reminiscent of another on Christmas Eve when a father in Australia discovered he had a blue-ringed octopus in the pocket of his swimming suit. He, too, was fortunate and didn't suffer any ill effects as a result of the encounter.

It's not just a rule in Australia, but it's especially true in Australia: You should not pick up a creature just because you think it's cute.


Dustin Nelson is a Senior Staff Writer at Thrillist. Follow him @dlukenelson.
Our Newsletter