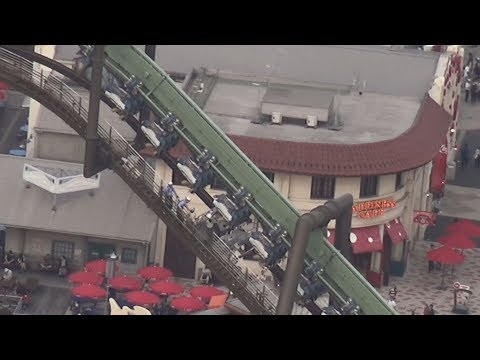 Roller coasters are fun because, despite all evidence to the contrary, things are going according to a plan set down by some very smart people. If things don't go according to that plan, however, you are in for a very bad time.

Like the passengers in this video of a stalled roller coaster at Universal Studios in Osaka, Japan. The Jurassic Park-themed Flying Dinosaur stalled on its tracks around 4:45pm on Thursday, and its 60 passengers were trapped for two presumably terrible hours. And on top of being stuck, you ride this roller coaster while prone, which means these riders were looking straight down at the ground for hours. One carriage was stuck between 65 and 100 feet above the ground -- and the other far luckier carriage was stalled just before the terminal.

This isn't the first time this particular rollercoaster has had problems either. The Japan Times reports that though the Flying Dinosaur just opened back in March 2016, similar situations happened in August and September of 2017.

Thankfully no one was injured in Thursday's incident, but one assumes a bad time was had by all.

As a testament to how far people will go to experienced the joys of modern engineering, once the attraction was operational again around 7pm, people resumed lining up like nothing extremely horrible and nightmarish had just happened.