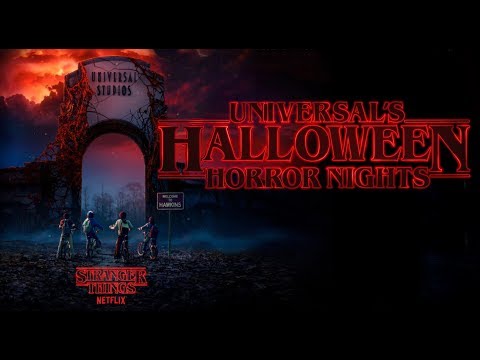 Season three of Stranger Things is definitely coming, though it's still unclear when, or which weekend you should free up in advance for a full-on binge-fest. However, you don't have to wait much longer if you're hoping to experience the world of Eleven, Will, and poor ol' Barb up close and personal. That's because Universal Studios is set to unveil a brand new attraction at its theme parks inspired by the Netflix mega-hit, designed to transport visitors right to the Upside Down.

The maze attraction, which is being developed in collaboration with both the series creators -- The Duffer Brothers -- and its executive producer, will debut this fall at Universal Studios' Halloween Horror Nights, the annual festival that brings to life top-quality haunted mazes and other frightening experiences inspired by popular movies and TV shows at its theme parks around the world.

Info on what will be included in the Stranger Things maze is scarce still, but you should expect for it to capture the creepiest parts about Hawkins, Indiana in excruciating detail. Specifically, it'll be inspired by the events that went down during the first season, and will "bring the chittering, predatory Demogorgon to Halloween Horror Nights to stalk unwitting guests as they encounter iconic scenes, characters, and environments from the mesmerizing series," according to a press release. The announcement also teases that the maze will take attendees through recreations of Hawkins National Laboratory under the U.S. Department of energy, the Byers home, and the Upside Down woods, with "surprising twists and unexpected turns" around every corner.

Universal's wildly popular horror-fest will kick off at both its Hollywood and Orlando parks on September 14, and at the Singapore location on September 28, with each Stranger Things maze promising to be be all-new and distinct from the others. Then again, if you're looking for more variety, each park will also have its fair share of other mazes and "scare zones" meant to transport visitors to a place where they can "become victims inside their own horror film."

If you're interested, more details and ticket info can be found here. And hey, now might even be a great time to book a super cheap flight to one of the parks.