People don't take too kindly to anything that interferes with their precious vacation time... 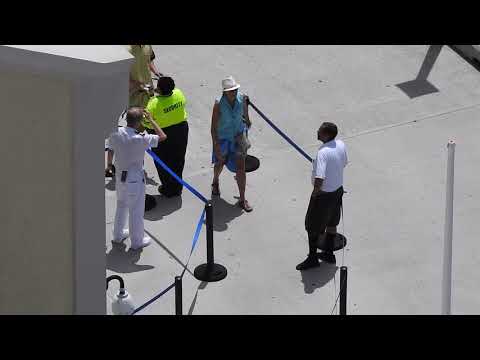 People don't take too kindly to anything that interferes with their precious vacation time. Just think of the fury you feel when your flight gets cancelled, or when a work emergency rudely interrupts your beach hang. Frankly, we could all use a dose of the positive vibes that were echoing from a packed cruise ship recently, when passengers on-board let out a roar of cheers for a few stragglers racing to catch the boat.

While preparing to disembark after a stop in Bermuda, a Norwegian Cruise ship was held up by a few dawdling passengers, who failed to show up in time for the 2:30pm departure. Per protocol, the crew announced their names over the ship's intercom, then eventually pulled the gangway to leave without them, according to a video (shown above) posted to YouTube by passenger Laszlo Bagi. However, the crew reversed course and put the gangway back in hopes they were racing to make it aboard.

Sure enough, the trio of tardy passengers were making their way and the ship full of passengers, who were delayed by 20 minutes, made their absence known. The ship erupted in cheers as the people bounded down the dock. The cheering sounds closer to what you'd expect at a marathon finish line than from a ship full of delayed vacationers, but you can also hear at least one person yell -- somewhat annoyed -- "hurry up" as they passed through the boarding gates.

Good luck getting such a hero's welcome next time you're late for something.