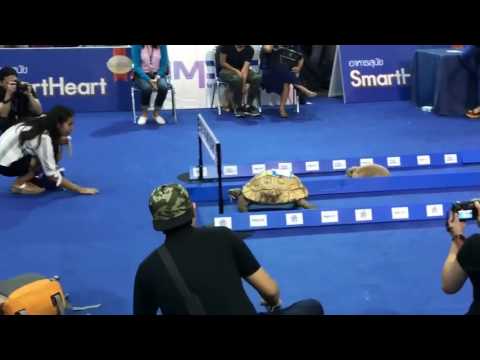 The Tortoise and The Hare, a fable about overcoming a stronger adversary and proving the haters wrong, is one of the most universally cited and popular folktales in western history. It also turns out that the story makes for a great internet melodrama when it happens in real life.

A year-old video of a tortoise and hare racing went viral on Twitter yesterday, proving that what was true in the 4th century B.C. provides a good reason to stay glued to your computer in 2017. The video seems to convey that a bit of cunning and willpower will always beat an over-reliance on raw talent. Observe the animal kingdom at work:

In case you need a brushing up on the Greek fabulist Aesop's most prominent work, The Tortoise and the Hare chronicles a legendary foot race between a young, brash, and cocksure hare and an unassuming tortoise, who is all but certain to lose the competition. But after the hare takes his opponent for granted, the tortoise actually prevails. It's one of the world's first underdog stories, and why your parents have told you "slow and steady wins the race," more times than you care to remember.

Still, seeing it play out IRL is almost too meta, not to mention very suspenseful.

As you saw in the video, the tortoise lumbers its way to victory, proving that everything we've been spoon-fed about hard work and dedication since humans wore togas is actually true. Let this be a reminder to never underestimate the tortoises in your life.


Sam Blum is a News Staff Writer for Thrillist. He's also a martial arts and music nerd who appreciates a fine sandwich and cute dogs. Find his clips in The Guardian, Rolling Stone, The A.V. Club and Esquire. He's on Twitter @Blumnessmonster.
Our Newsletter