Watch This Soothing Clip of a Rainbow Waterfall in Yosemite

Take a brain break from your day with this video.

Yosemite National Park is home to so many marvelous wonders, from the ancient sequoia trees to the awe-inspiring granite cliffs. One far less permanent marvel at the park that caught the attention of many in 2019, and may have repopulated your timeline this month was the spectacular and rare sighting of a rainbow waterfall.

No, you haven’t wandered into an alternate Lisa Frank-illustrated universe. A rainbow waterfall is something that can truly happen in nature and although it is incredibly rare, it did happen in 2019. This June, the clip has resurfaced on Twitter to the delight and amazement of many.

According to Matador Network, the slow motion, eight-minute video—now available on YouTube— was originally shot by photographer Greg Harlow in Yosemite National Park. According to Harlow’s YouTube caption, the phenomenon was a combo of two unusual events, "very high winds at the perfect time of day, 9 am, and unusual heavy water for November, these special circumstances created a previously undocumented 2,400 foot rainbow waterfall." 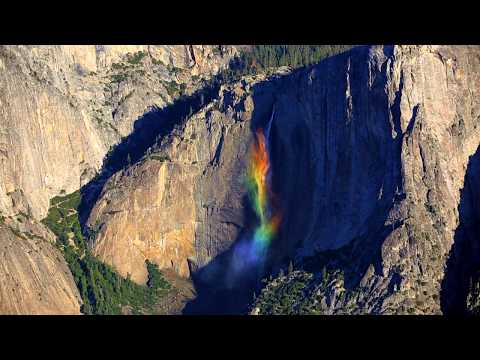 According to SF Gate, the photographer was there to shoot the fall at sunrise when he saw it turn red and then the full spectrum of the rainbow. Harlow captioned his original 2019 Instagram post by saying, "This certainly was not a planned event. I spent over 3 months total in Yosemite last year and just got lucky."

Harlow says that he was one of ten people present that day in November 2019 to see that wonderful rainbow waterfall. To this day, the photographer says capturing that moment was "the most jaw dropping moment of my career so far."