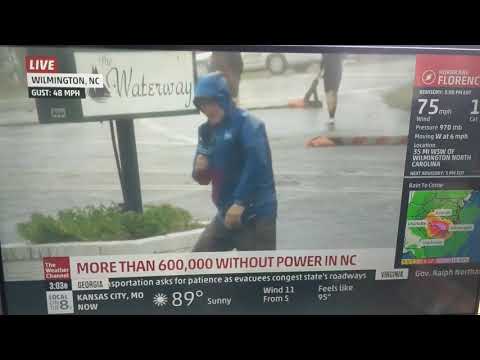 Hurricane Florence made landfall in the Carolinas on Friday, imperiling residents and even closing down Waffle Houses. Though it takes a particularly serious storm to close down a Waffle House, almost every storm is an opportunity for weathermen to stand in the rain as the wind whips them around like those giant inflatable dancing things outside car dealerships.

The video above, however, has some wondering if it's a little exaggerated. In it, Mike Seidel, a reporter for The Weather Chanel, valiantly fights against the storm as it passes through in Wilmington, North Carolina. We're talking Act 3 of King Lear. We're talking good TV. But then: a twist.

Two bros casually stroll by in high socks and shorts. They seem to be experiencing an entirely different climate, and in what looks like an attempt to get them out of the frame, the camera zooms in a bit.

"This is about as nasty as it's been," Seidel says, swaying in something resembling a surfing stance.

It's strange stuff and has led to some demanding an Oscar on his behalf. The Weather Channel, however, has pushed back on the idea that he was exaggerating.

“It’s important to note that the two individuals in the background are walking on concrete," the network told BuzzFeed News, "and Mike Seidel is trying to maintain his footing on wet grass, after reporting on-air until 1:00 a.m. ET this morning and is undoubtedly exhausted.”

You'll have to decide for yourself what to believe.

James Chrisman is a News Writer at Thrillist. Send news tips to news@thrillist.com and follow him on Twitter @james_chrisman2.
Thrillist TV
History of
The History of Tailgating